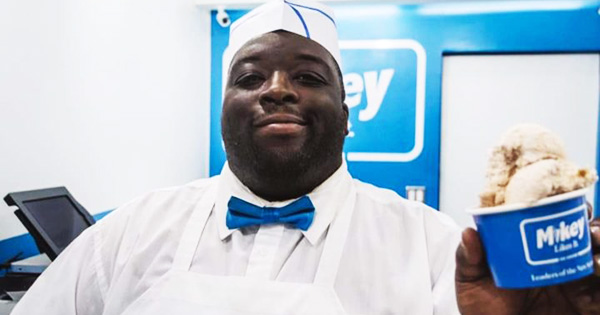 “The inspiration behind the ice cream shop is to create a safe haven for everyone that also creates memories and empowers the community,” Cole told TravelNoire.com. “This is my version of the lemonade stand. The kids now have to be encouraged and empowered to be able to reach their goals and in turn, be successful.”

Cole’s fascination with ice cream can be attributed to his late Aunt Lucy. According to the entrepreneur, he discovered one of her ice cream recipes, made revisions and created his own version that he uses in all of the flavors.

Cole’s long-term goal is to contribute more than desserts. “While we work to grow our business, we will be launching our Mikey Likes It Ice Cream Academy. This is our not-for-profit program where we take at-risk youth and teach them how to obtain a food handlers certificate and be able to work in the food world,” he said. “We will help them build character and then give them the opportunity to work in the business.”

His philanthropy extends beyond the dessert and foodservice industry. “Whether it’s an ice cream maker, a flavor pilot, a graphic designer or anyone that has a passion the help the business grow, we want to help build others as they help us grow the business. This is what will help strengthen each other and in turn strengthen the community.”

Mikey Likes It Ice Cream has received much acclaim and has been featured in popular media outlets including Essence, New York Magazine, The New York Times and O, The Oprah Magazine.