Top 7 Reasons Cape Town, South Africa Should Be on Your Bucket List 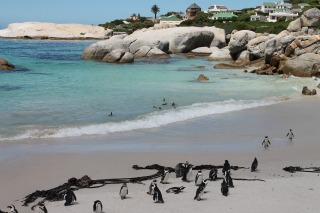 As parts of the United States brace for cooler fall temperatures, coastal regions in South Africa, such as Cape Town, are preparing for the spring and summer season. Cape Town, affectionately known as the “Mother City, â€ is a treasure trove of award-winning wineries, natural wonders of the world, and fascinating culture. Here are seven reasons to add Cape Town, South Africa, to your bucket list.

[Related: International Destinations to Travel While the US Dollar is Strong]

Robben Island — Take a trip back in time to explore the prison where Nelson Mandela, a South African anti-apartheid revolutionary, spent 18 of his 27 years in jail. Robben Island, a UNESCO world heritage site, is located about 8 miles from Cape Town and accessible via a 30-45 minute boat ride. Throughout the ride you’ll experience great views of Cape Town and Table Top Mountains but take note, the boat ride is known to be very bumpy due to the wind and waves. Tours are guided by former political prisoners, which makes the experience even more moving and memorable. And visitors are allowed to see the cell that belonged to Nelson Mandela.

Boulders Beach Penguin Colony —Touristy attraction, but oh so worth it! Boulders Beach is a lovely tranquil location with the most amazing views of white sandy beaches, boulders and, of course, countless numbers of tiny penguins. For a small conservation fee, visitors gain access to an endangered colony of African penguins. Restaurants are also in close proximity, along with designated picnic areas. This is also a great location to stop on your way to the Cape Point Nature Reserve.

Table Top Mountain – Recently named one of the “New Wonders of the World,â€ views from Table Top Mountain are stunning and breathtaking. Visitors have the option to hike up the mountain (2.5 hour duration) or take a cable car, which gives you 360 degree views of Â Cape Town and surrounding areas such as Devil’s Peak, The Twelve Apostles, Helderberg, and Robben Island.

Shop at Victoria WharfÂ and Dine at V&A Food MarketÂ – The V&A Market on the Wharf sits in a historic post-card ready building along the waterfront. And the Victoria Wharf is an upscale mall. Visitors can expect a combination of boutiques, large department stores, outdoor entertainment, local artisans, and a huge selection of food vendors and cultural attractions.

Wine TastingÂ — Discover the vineyards of Franschhoek and Stellenbosch,
while gazing at magnificent mountain views and indulging in some of the best wine South Africa has to offer. The South African wine region, is also home to several black winemakers including Ntsiki Biyela, the country’s first black female winemaker, M’hudi winery is a family run business and Vivian Kleynhans who owns and operates Seven Sisters Wine, a variety of wines named after each sister. In route to the Winelands, you can also take a tour of Kayamandi Township. Be sure to arrange a visit with Mama Swartbooi in her home where you can witness an authentic South African custom such as a sheep head being cooked in the open fire on the pavement.

Shark DivingÂ — If you’re a daredevil, diving for sharks is sure to whet your thrill-seeking appetite. Described by many travelers as an unforgettable adventure, several companies offer half- and full-day excursions for people looking to jump in the water and get up close and personal with a few great whites.

Have you traveled to Cape Town, South Africa? If so, share your experiences below.