Masai Ujiri Puts His Money Where His Mouth Is 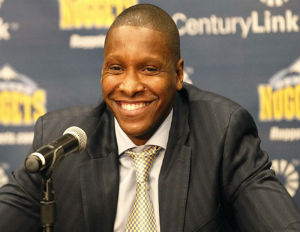 Ujiri is no stranger to the NBA’s disciplinary reactions. He was infamously fined $25,000 when during a fan rally last year, he yelled into the microphone “F— Brooklynâ€, prior to the start of a series between his Toronto Raptors and the Brooklyn Nets.

[Related: Where Are They Now? Casualties of the NBA’s Amnesty Clause]

This year, he’s back at it – responding to Paul Pierce’s comments in a recent ESPN interview where he states:

“We haven’t done particularly well against Toronto, but I don’t feel they have the ‘It’ that makes you worried,” Pierce said. “There isn’t a team I look at in the Eastern Conference that makes me say, ‘They are intimidating, we don’t have a chance.’â€

Needless to say that’s rubbed some in Toronto the wrong way, but Paul Pierce is just doing what Paul Pierce does, especially to younger players. CBS Sports reported that Demar Derozan of the Raptors responded to Pierce’s comments in a postgame interview saying, “He said something last year, he’s just gotta say something. Just let him talk, I could care less what he said.â€ As he walked away from reporters, he let out one final “S–t, I wish I see Paul Pierce.”

Where Derozan’s response was agitated and somewhat comical – Ujiri’s response was a triumphant declaration of intolerance for Pierce and his antics. “We don’t give a s–t about itâ€ Ujiri responded. The league has responded swiftly and said in a press release on Sunday:

Toronto Raptors General Manager Masai Ujiri has been fined $35,000 for using obscene language in a public setting on Saturday, April 18 prior to the Raptors’ playoff game against the Washington Wizards, it was announced today by NBA Commissioner Adam Silver. Â In addition, the Toronto Raptors organization has been fined $25,000.

According to CBS Sports, when initially asked what he thought about Pierce’s comment, Ujiri responded “I honestly don’t have enough money to respond to him. I think if I did have enough money, like, everybody knows exactly how I would respond to it and how the whole of Toronto would respond to it.” NBS Sports notes that Ujiri’s making $3 million a year, and after being disciplined similarly last year, I can’t help but think that maybe he’s already started to deduct these fines from his checkbook ahead of time. Ujiri issued a much calmer statement regarding the situation, stating;

“I have the deepest respect for Commissioner Silver and the NBA, and while showing passion for our team and fans I will choose my words more carefully in the future so as not to indicate otherwise. I apologize and have acknowledged the fine with the Commissioner. I consider the matter closed and our sole focus is on the playoffs.â€

Global Ambassador for the Toronto Raptors, rapper/singer Drake – who’s also seen the wrath of the league office -Â has the final word on the matter with an Instagram post that shows Ujiri with the caption “We’ll take the fine for that. That’s been where you find us at.â€

We'll take the fine for that. That's been where you find us at. ðŸ™6âƒ£

There you have it folks. Ujiri and Drake’s Toronto Raptors play Pierce’s Washington Wizards tonight @ 8pm EST, on NBATV.