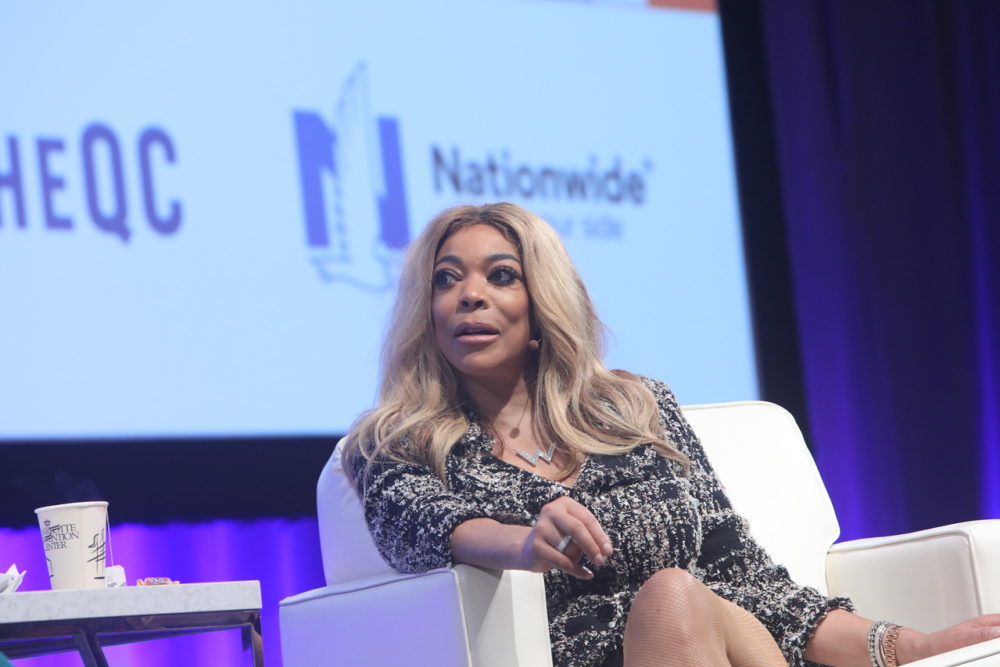 Williams was interviewed by BE’s chief brand officer of Women of Power, journalist Caroline Clarke. Below, is the transcript from the session.

[On being asked about the next level of her career]

My husband and I were partners—and he’s not the executive producer, I just have to clean the slate and start over.
I didn’t meet my husband until my 29th birthday and those years before I was already a property owner, I was already a radio star, I was already the boss of my own life. I’m returning to that life with a bigger platform. I won’t talk horribly about my husband. You can’t just make 25 years go away.

[On her tips for success]

Wear a watch, time matters. I will hail a cab before I am late. I will walk before I wait for a late person.

[On her first media job]

They [‘They’ being the station before Hot 97 became Hot 97 – 103.5] wanted a black person on the staff and with a black woman they got a double, they told me [that] and I didn’t care. I said was one day I am going to be successful. I mean I thought it was messed up for them to say that and it was messed up for me to take the job instead of going to The New York Post and telling the story. But I said one say I will be successful enough that I will be able to come back and share jewels.

[On her habits and career advice]

I am a skinflint, I am very cheap. Very cheap. Save your money, dress appropriately. Ladies, get yourself a wrap dress; a wrap dress will take you to the White House, a funeral, and back.

For the gentleman: watch your tattooing and the piercings, ’cause that’s not hot. I don’t want an assistant with a nose piercing or her eyebrows pierced. Watch your social media. Travel light, travel far—the person who told me that was Bugsy who is a legend [in radio] he was on WBLS—go by yourself you will go further. I have girlfriends and guy friends you don’t hear me talk a lot about them because they weren’t part of what it took for me to be here.

[On doing business with a life partner]

Don’t do it. [My husband]—he was available in terms of when he got into my life he saw that… he said, “I’ll hold you down.” When it came time for contract time it was me, my attorney, [and Kevin]. Now you see what happened to my life.

Marry a cardiologist and you go on to be an engineer—make sure people support you but have your separate lives. When you come home you have more to talk about than business. Keep it separate.

My role model is my mother, my parents have been married for 61 years. And they’re healthy. My personality is the spitting image of my mother. The important lessons I learned from my mother and my father: Always have a personal life and also save your money.

If you read headlines and buy into them, and they are juicy, I’m like, “If I didn’t know her I’d be watching that show’ and by the way we gained 63K followers on social since all the drama has been going on—I was very much a co-partner with my husband if you read and buy into everything you’d think that I was pushed to the side. I let him be the manager and also be the man. I am very much a girl at home, I love a man to be a man. I mean open the door for me, all that, I am old school.

In business don’t mess with me, and now that it’s just me, I love it. And my business is growing. I have a partnership now with Lifetime TV. And I’m still going to be manufacturing clothing, and I go to every button, every zipper. I was with QVC and HSN and I’ve learned a lot and I am present; I’m not going to just slap my name on something, which I could do—that’s what they expect when they first sign you up, they want you for your name and your exposure and then they don’t realize the headache I will be. It will take a five-hour meeting just to decide which zippers I want on this dress.

[On new judge show she is executive producing]

I am not a judge but I am judgmental

[On advice for young men and young women]

You need your 20s to be selfish and grow up and grow your business and then when you are in your 30s; kids are an obligation and that obligation will slow you down.

You will not be able to move to Idaho in a studio apartment because that’s all you can afford when you have kids—that’s one thing as far as the men.

Because sometimes you all will drop your seed, even though you love your kids…and then you all of the sudden want to be a rapper.

And girls you all too… you’re sick in love and you just graduated from Fordham University and you want to go to graduate school in Seattle but you don’t want to leave your boyfriend. You better put that love on hold, you better grow that career, love will always be there, just keep it in your mind.

And I am a wife, I’m a serious girlfriend. I’m not one of these girls who, “I don’t need no man.” Take your 20s and you be by yourself. And you better go to graduate school in Seattle and leave him alone. I didn’t say you can’t be long-distance boyfriend and girlfriend.

When I walk in the room along with my team—people are impressed with that because they don’t expect me to walk into the room and have my questions and stuff ready, But you’ve got to be on the ground floor of your operation, I don’t care how good you get. You better show up, be on time, dress appropriately, and don’t just rely on your team to bring back the information because you are such a big shot and you don’t have to be there. No.

[On her life and career currently]

So now, the difference in my business is that it used to be Kev and the team. And then Kev would bring me in, ‘OK the deal’s done, now it’s time for you to meet the people,” Not now. I want to be in on the first conversation about the deal and I want to be in on every meeting until the deal is done. And that’s the way I roll.

July 8th we’re coming back with a new show. The only reason we are off is because Fox is playing the World Cup. The majority of my shows are on Fox although I am also on ABC, NBC, CBS…but they made me have off because of the World Cup.