Travel Around the World in NYC Without Jumping on a Plane 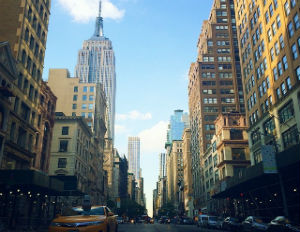 New York City is one of the few places in the world, where you can experience five different countries in one day–without jumping on a plane. Looking to indulge in curries and tandooris? Â Head to Jackson Heights Queens– the home of Indians, Bangladeshis and Pakistanis. Do you have a taste for rabbit stew? A metro card can transport you to Brighton Beach, a Brooklyn neighborhood featuring a tight-nit Russian speaking community.Â In a city where there’s a treasure trove of history and culture, having a taste for international cuisine is only the beginning.

Here are a few International hot spots worth checking out:

To get a taste of traditional Russian flare try Primorski Restaurant. For culture head to the Master Theatre where major Russian singers, theater troops and comedians perform. The grand theater holds performances exclusively in Russian ranging from musical performances, to comedy troupes.

Indians, Bangladeshis, and Pakistanis call this area home. Known for some of the best Indian food in the area, a stop at the famedÂ “Jackson Diner” for tandoori chicken or goat curry is a must. This area is also great for collecting your favorite Bollywood films and music.

Flatbush, often considered the heart of Brooklyn, Â is considered a second home for mostly Jamaicans and Haitians. This area features a vibrant Caribbean culture of shopping and restaurants. And, the Brooklyn Public Library features a Caribbean Literary and Cultural Center focused onÂ promoting intercultural understanding. Some must try restaurants for authentic Caribbean cuisine includes Exquisite Delight for jerk chicken, escovitch fish and macaroni pie, and Sybil’s Bakery & Restaurant for a Guyanese patty.

Do you have any favorite international hot spots? Leave me a comment below.