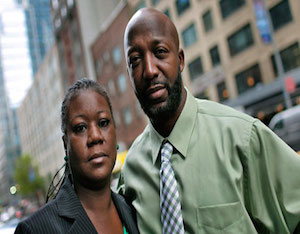 As the media continues to opine over the results of Michael Brown’s autopsy, Sybrina Fulton continues to champion changes to protect minority youths in America.

The mother of 17-year-old Trayvon Martin stood in front of the United Nations in Geneva, as the council reviewed America’s record on fighting racial discrimination. Her son’s death in 2012 sparked global outrage, which has since doubled with subsequent deaths of other minority young adults.

“We should put our heads together to come up with a solution so our young people can stop dying and so they can have a future,” Fulton said. “I think far more needs to be done,” she said. The shooter in the Martin case, volunteer neighborhood watchman George Zimmerman, was controversially acquitted after claiming self-defense under Florida’s “Stand Your Ground” law.

With African Americans making up 13% of the total U.S. population, it is startling to note that they total 50% of homicide victims, as pointed out by the UN Committee on the Elimination of Racial Discrimination. During the council’s two-day review of the United States, Fulton, along with Ron Davis (father of slain teen, Jordan Davis) lamented that the proliferation of “Stand Your Ground” self-defense laws, currently in place in around half the states, has the community “feeling under siege.”

Davis said, “The message to minorities is either we’re going to load up and shoot you, or we’re going to incarcerate you.” It is required that all UN member states undergo this UN committee review, which has found America insisting that its country was a “vibrant, multi-racial, multi-ethnic, and multi-cultural democracy” dedicated to fighting racial discrimination.

While Martin’s mother welcomed the dialogue, she has said that she’s “unconvinced” by the measures taken so far. “The bottom line is that more lives are still being taken,” she said. “Until you stop that, this is all just a shadow with no meaning.”