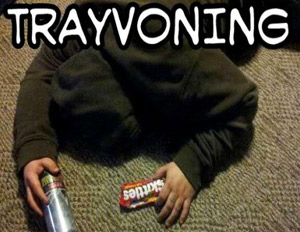 Nearly three months have gone by since unarmed Florida teen Trayvon Martin, 17, was shot and killed by George Zimmerman, 28, while he was on his way home from 7-Eleven carrying Skittles and an iced tea. Martin’s case was low-profile until it got its buzz on social media and began making national headlines, which sparked a national conversation about race, “Stand Your Ground,â€ and gun laws in America.

While many Americans empathized with Martin’s family, others apparently found humor in Trayvon’s death.

A new photo meme called “Trayvoningâ€ have been gaining steam on the Internet. The photos illustrate men wearing hoodies, with iced tea cans in one hand and Skittles in the other, laying down on their backs or stomachs as if they were dead. This “Trayvoningâ€ trend has promptedÂ Tumblr andÂ Facebook pages.

The Facebook page calledÂ Trayvoning currently has just 5 likes. The anonymous authors of the page describe it:

Trayvon Martin was a 17-year-old African American male who was unarmed and got shot by a raciest [sic] mexican american.

The images have disturbed bloggersÂ Sandra Rose andÂ Brande Victorian of Clutch magazine. And others have condemned the practice on Facebook and other social media outlets.

View pictures of this troubling trend at The Grio