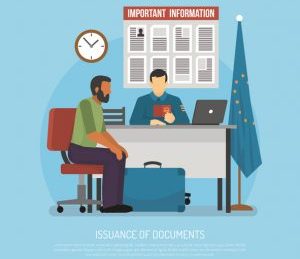 In addition to growing fear in immigrant communities about family members wrenched from their loved ones and children separated from parents, there’s another unfortunate outcome: the rise in deportation scams.From impersonating Immigrations and Customs Enforcement (ICE) agents, to using technology to send fraudulent phone calls, emails, and texts; scammers are taking advantage of terrified undocumented immigrants.

“These scam artists are taking advantage of the current political environment,” says Adam Levin, chairman and founder of CyberScout. A cybersecurity expert, Levin is also the author of Swiped.

“The Attorney General [in Queens, New York] Schneiderman talked about the incident where someone was approached on Roosevelt Avenue and told, ‘Pay us.’ When he refused, they said, ‘You are going to be arrested.’ Someone else in Queens was told, ‘Give us $250, or you will be arrested,’â€ Levin says. Queens, New York is home to many communities of immigrants from all over the world.

Email and text messaging are also favorite tools of immigration scammers. “They send emails out,â€ explains Levin. “[Scammers] will claim on email–let’s say–something about a new development in immigration policy, or send an inside scoop on where ICE officials [will] hit next.â€ These emails often instruct the recipient to make some sort of payment to get the advertised information.

“These immigrants are doubly victimized,â€ Levin says. They are still at real risk of being deported, due to President Trump’s immigration crackdown, and “someone stole their money on top of it,â€ he says.

How do scammers find vulnerable people to target? In a variety of ways, according to Levin. “It’s the same way undercover people operate,â€ he says. “They talk to people and hear things. They can buy lists–there is all sorts of info out there [and] on the dark web.â€ He says these scammers are homed in on areas of cities where immigration populations are known to live.

These particular types of scams have increased so dramatically, that the New York Attorney General Eric T. Schneiderman released a public notice on his website, issuing an urgent fraud alert.

The other problem is that, in the aftermath of being scammed, undocumented immigrants often have little or no recourse to file charges or recoup swindled money. That is because they are often underbanked, using check cashing places and wire transfers that do not offer the fraud protection of traditional banking institutions or credit card companies.

While undocumented immigrants are particularly vulnerable to fraud, anyone can become a victim. Levin offers some advice from his bookÂ Swiped,Â “Whether it’s someone posing as an ICE or IRS agent, no one from those agencies will call you up, send an email, or knock on your door, and ask you for money–ever,” he advises.

He also suggests using two-factor authentication when logging on to financial websites, shredding documents with important information; using known websites; and setting up monitoring and fraud protection offered by more and more banks, credit card companies, and other institutions.