'Try Jesus, Not Me!' Fight Breaks Out During The Middle of Pastor's Sermon At Tennessee Church 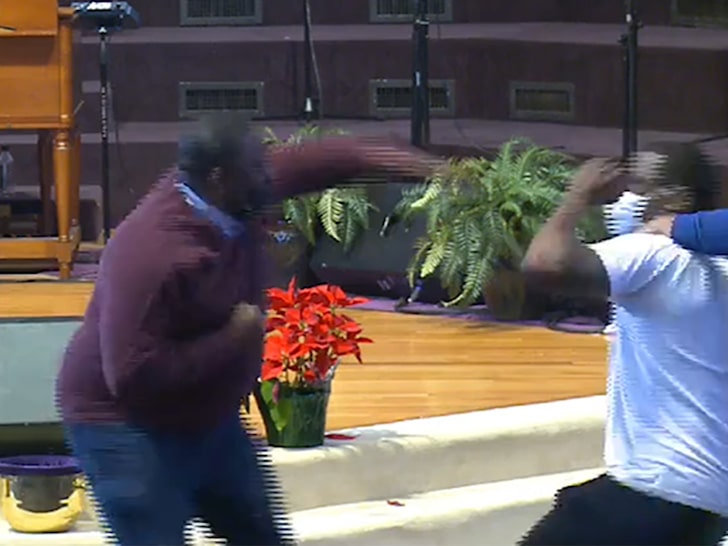 Sunday service came one day after Christmas this year. With it landing on the last Sunday of the year, two churchgoers made sure to handle their unfinished business before the New Year hits.

A shocking video from Olivet Baptist Church in Chattanooga, Tennessee, shows two men throwing hands in the front row while the pastor was speaking. In a video shared by TMZ, one man is sitting in the first row when another man approaches him and starts throwing punches.

The seated man quickly returns the fade and the two churchgoers went at it right in front of Bishop Kevin Adams.

“Stop it, Marcus. Marcus, come on,” the Bishop can be heard saying as the two men continue fighting.

Someone in the church quickly ended the live stream but not before the internet was able to capture a clip of the wild fight.

This church fight is going viral 🤣🤣🤣🤣 #chattanooga #Tennessee Olivet Baptist Church ! ( how mad you have to be to start a fight in church) https://t.co/ZKSDwlTWIO

In an interview with the outlet after the melee went viral, Adams said the man in the white shirt had just gotten out of rehab and decided to pick a fight with the youth pastor.

Adams says the man might’ve relapsed and ignited the fight because afterward, he had no idea where he was or the totality of what he had just done.

The Bishop says they were able to calm the man down and he immediately broke down in tears when he realized the drama he started. The man who started the fight has decided to return to rehab, and the church fully supports him in the decision.

The fight video has circulated around the internet and now the Tennessee church has gone viral for all of the wrong reasons.

In the words of Tobe Nwigwe, “Try Jesus, not me. Cuz I throw hands.”