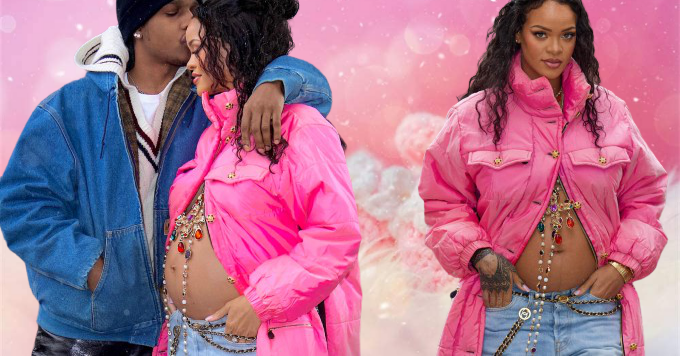 Rihanna and A$AP Rocky kicked off the week by breaking the internet with their pregnancy announcement.

One of music’s favorite couples is expecting a bundle of joy. It’s the first child for Rih and Rocky, who have been longtime friends before finally giving a serious relationship a try.

The Grammy Award-winning pop star debuted her baby bump while out in New York City over the weekend with the rapper, People reports. With Rocky being a Harlem native, he took Rih Rih to his hometown to debut the music icon’s pregnant belly.

The two style masters seemingly used their outfits to make the announcement. Rihanna wore a long pink jacket with oversized outerwear unbuttoned at the bottom to reveal her growing bump. A gold cross with colorful jewels adorned the top of the baby bump.

The duo have been friends for years, with Rihanna appearing alongside Rocky in his 2011 music video for “Fashion Killa.” Over the years, the pair fueled romance rumors and confirmed their romance following Rihanna’s split from Hassan Jameel, Harper’s Bazaar reports.

Last May, Rocky gushed about Rihanna being the “love of my life.

“So much better. So much better when you got ‘the One.’ She amounts to probably, like, a million of the other ones. I think when you know, you know. She’s the One,” Rocky told GQ.

Once word of the pregnancy got out, Twitter went off with their reactions. Most noticeably, Drake became the butt of the joke.

Drake waking up and seeing why Rihanna trending pic.twitter.com/QIZhnKv4rT

Fans also hilariously threw Future into the mix, given his history as a lady’s man.

Not to forget, the baby will be the byproduct of a music and fashion icon and popular Harlem rapper. The swag is expected to be on another level, and Twitter knows it.

the baby once it realizes rihanna is its mom pic.twitter.com/CJj79iYA3f

For the fellas who had dreams of somehow getting Rihanna one day, they’re not taking the baby news too well.

Me seeing this Rihanna news pic.twitter.com/ITRGjaQNN2

For the Rih Rih fans who were hoping to get some new music from the Bajan sensation, they’ll most likely have to wait a little longer.