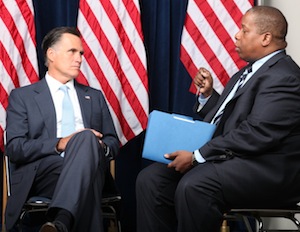 Dingle, an award-winning journalist and expert on national political policy and presidential history, will share insights from his exclusive Oval Office interview with President Obama in April and his exclusive interview with Candidate Romney at the NAACP Convention in July. Dingle’s interviews with President Obama and GOP Candidate Romney will appear in the August and September 2012 issues, respectively, of Black Enterprise magazine.

Since the beginning of President Obama’s first term in office, Dingle has spearheaded Black Enterprise’s White House coverage, including landing the first exclusive print magazine interview with the President. National politics and policy is also frequently the topic of Dingle’s blog at BlackEnterprise.com, Power Moves.

To participate in the chat, search for the hashtag #BEVOTE2012 on Twitter or join the discussion on TweetChat.com at http://tweetchat.com/room/BEVOTE2012.