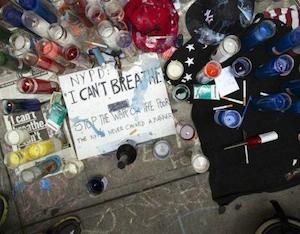 Continued have continued as more and more Americans are outraged after the deaths of unarmed African Americans.

Most recently, New York, Boston, Philadelphia, Oakland, Chicago and Los Angeles held “Hands Up, Don’t Shoot” protests and “Die-Ins” which stopped traffic and caused an uproar on social media. With systemic commotion pegged to grand juries across the country deciding not to indict police officers who kill unarmed black men, the hurt masses have taken to the streets (both real and digitized) to express their anger.

Out of the fire and passion that have been fueled by such tragic loss, a few Twitter hashtags have been gaining traction over the past few days. In addition to CrimingWhileWhite and #BlackLivesMatter, the latest one, #ICantBreathe, is directly inspired by the senseless death of 43-year-old Eric Garner. Garner was a Staten Island resident, a horticulturalist and a married father of six children, who was killed by police (according to city medical examiners) after they attempted to arrest him for selling loose cigarettes.

Currently, the United States Justice Department is investigating whether or not Mr. Garner’s civil rights were violated.

#ICantBreathe represents the last words caught on video as New York City police officer Daniel Pantaleo utilized a banned chokehold to restrain the 43-year-old Garner. The news that Pantaleo would not be charged with Garner’s death was not a surprise to the social media world, which quickly took to Twitter to vent its collective frustrations toward the legal system and law enforcement.

We here at Black Enterprise empathize with the community at large, and continue to urge others to join in to support the fight against police brutality. With that said, as attitudes range from incredulous rage to stunned sadness, we spotlight the most heart- rending tweets of the #ICantBreathe trending hashtag.