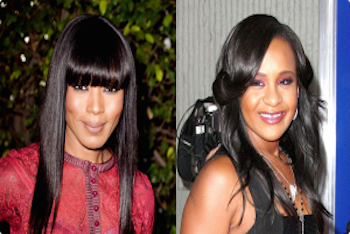 After the success of the TLC biopic, the small screen has been interested in telling the stories of the entertainment world’s biggest and brightest. Word around Tinsel Town is that Angela Bassett will direct the Lifetime biopic about Whitney Houston. When the late crooner’s daughter Bobbi Kristina got word about it, she became irate and took to Twitter to vent.

“Ha MsAng “bassketcase” has such a damn nerve,” Houston and Bobby Brown‘s daughter said online. “My lord, at least the world doesn’t mistake me for the wrong sex! She has #XtraEquipment.” The recently married 21-year-old didn’t stop there, as she continued tweeting, “When I win my first Grammy or Oscar, *shrugs* hmm whichever comes 1st, I’ll be sure 2 shout UR name out b—h! Haha Ur test results = MALE. Lmao.”

Choosing to not be shy at all about her feelings for Angela Bassett, the Lifetime biopic, and not being casted in the project—Bobbi Kristina has proven that she may not be ready for the spotlight after all. Bassett has cast Yaya Alafia (“Lee Daniels’ The Butler”) as Whitney Houston because as an actress herself, Bassett seems well-informed about the performer’s skill set.

She gives her reason why Bobbi Kristina didn’t fit the bill. “I know she’s [Bobbi Kristina] acted here and there. I know she’s been on their family’s reality show, but she’s not an actress and acting is a craft,” Bassett expertly pointed out. With only 21 days to shoot and turn in a project worthy of airing on television, Bassett and her crew want to make sure they put their best foot forward.

When Bobbi Kristina got word about the article, she let her distastefulness for Angela Bassett turn into deep-seeded anger on Twitter. No one is exempt from being blasted on Twitter, and the Internets took Bobbi Kristina to task for using such vulgar language toward a Hollywood icon. We found some of the best reaction from Twitter for your perusal.