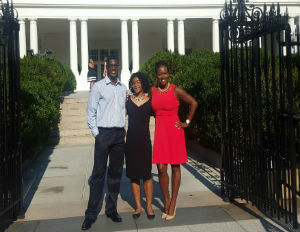 Dominique Jordan Turner, president and CEO of Chicago Scholars, attended the event, along with scholars Christopher Wilson and Nia Hill, who participated.

Wilson says it was a once in a lifetime experience.

“I left feeling really motivated by the panels, and as if anything is possible with hard work,â€ Wilson says. “Jidenna, a musician who performed at the event, said he had made a pact with himself when he was in college, to put himself in an uncomfortable situation once a week, which helped him grow. Now I want to try to do the same thing when I’m in school.â€

Wilson, who has been in Chicago Scholars since his junior year of high school, is heading to the University of Wisconsin-Madison in the fall where he plans to major in computer science or possibly double major by including computer engineering.

Wilson has been featured on FOX 32 Chicago because of his extraordinary resilience. Instead of bemoaning the lack of positive, educated role models in his life, he gamely became his own role model.

Nia Hill, like Wilson and all the other students at the summit, has overcome obstacles to academic success. In Hill’s case, she and her mother experienced homelessness at the worst time: Hill’s senior year of high school.

Yet Hill remained actively involved in her community and continued to pursue her dreams of higher education. Chicago Scholars helped her to stay on track and keep her goals in mind. Hill, who will attend Howard University in the fall, was recently the subject of a documentary on NBC 5.

Jordan Turner says, “All the students had truly ‘beaten the odds.’ For some it was foster care, for others, homelessness or challenging urban environments. The room was filled with students going to two-year or four-year schools, or vocational programs providing some level of certification.â€

Jordan Turner said the entire event was powerful, but the first lady’s transparency was especially meaningful.

“When you see people who are amazingly successfully talk about things that you yourself have experienced, it’s affirming to say we’re all the same kid, and if she can do it, I can do it. People left with a stronger sense of confidence and a belief that they too could do it because our first lady is one of them.â€