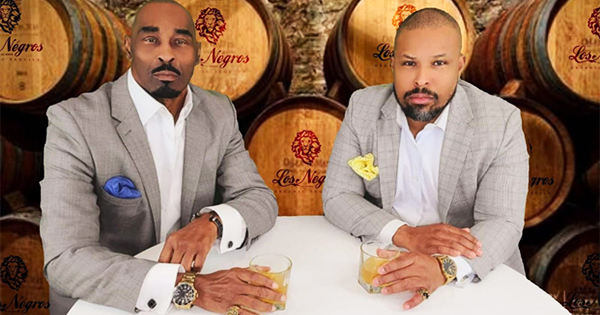 Meet Thaddeus Massey and Randy Morgan, two Los Angeles-based entrepreneurs who are the founders of Los Negros Organic Tequila. They are game-changers on a mission to bring underrepresented groups to the Tequila business table with a voice!

Their tequila product is the brainchild of Aficionado Thaddeus Massey. However, before getting into this industry, Thaddeus was a working man in the world of business. After a brief stint as a professional athlete, Thaddeus got his first break in the workforce in the entertainment industry consulting talent in front of and behind the camera.

Thaddeus’ experience extends throughout the industry working with major studios, agencies, and management firms on various aspects of creative projects including branding and sponsorship deals for his clientele with major beverage distribution companies.

Based on his experience managing budgets and consulting, he recognized a severe lack of financial literacy in the entertainment and sports industry. As a result, he and a partner launched a financial solutions and insurance services firm, EXDS Unlimited, whose focus centers on advising film/TV talent, athletes, and corporate executives on alternative investment options and tax advantaged vehicles for their businesses and personal estates.

Once Thaddeus teamed with his old pal Randy, they decided to join forces forming MorMass LLC.

Thaddeus and Randy’s experience in the sports and entertainment fields allowed them to forge relationships with many spirits brands owned by Diageo & Bacardi in an effort to market, co-brand, and implement strategic endorsement opportunities for their clientele.

It was in 2019 that Randy inspired Thaddeus to found the ultra-premium distilled spirit brand now known as Los Négros Organic Tequila.

They were in the middle of a client appointment when Thaddeus ordered a round of tequila flights for the group to celebrate closing a deal at a local fine dining establishment.

As he sipped, Thaddeus noticed not one of the “ultra-premium” tasters quite satisfied his palate.

“Really?! Maybe you should just start your own brother” said Randy. It was at that moment Thaddeus conceptualized Los Negros and enlisted his partner Randy for the ride. A week later, Thaddeus booked his flight & headed to Mexico to find the best agave grower and distillery in Jalisco.

With the assistance of friendships and business relationships, Los Négros will be featured in major venues, films, television shows, music videos, and executive events, where the world will witness the emergence of a global ultra-premium brand that satisfies palates like none other.

Thaddeus claims his career exposed him to high-end luxury. “In a sense, I wanted Los Négros to taste and feel like stepping out of a Black car onto a private jet wearing a Black tie or little Black dress with a Black card at your disposal…pure luxury,” thus Los Negros.

The successful entrepreneurs have always found beauty in giving back.

Because they don’t believe in exploiting the natural resources of any land, the Los Négros brand will be donating a portion of their proceeds back to Mexico via Colina De Luz (Hill of Light), a children’s orphanage in Tijuana who gives about 50 boys and girls a chance at life since 1986.

Thaddeus and Randy are also committed to giving back to underserved communities domestically starting with their own neighborhoods of South Central Los Angeles and Inglewood, California at “A Place Called Home,” which provides children a safe haven to thrive in education, the arts, and community engagement, away from the horrors of gang violence and local crime elements.

The parent company of Los Negros, MorMass LLC, will also be forming it’s own non-profit specializing in national mentorship campaigns for young men in leadership development, financial literacy, and entrepreneurship.

Los Negros Spirits, Inc. is a purposeful-driven company on a mission to do something sustainable and impactful to promote change and inclusion for underrepresented groups in the Tequila world.