Co-Founders of Sister 2 Sistah Are Taking Houston By Storm 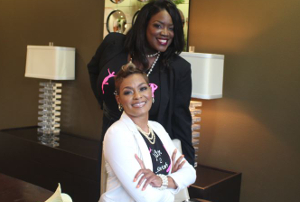 When you think of people wearing many hats, you may need about a dozen heads to keep up with these two ladies who are taking Houston by storm.Â  Rebecca Briscoe and Nakia Cooper are both media professionals and the co-founders of Sister 2 Sistah, a mentoring program for college women of color who are fighting to overcome obstacles.

Black EnterpriseÂ had the opportunity to talk to the dynamic duo, who call themselves “The General” and “The Queen.” Read on, and it will not take long to guess who’s who.

Who is the dynamic duo of Rebecca Briscoe and Nakia Cooper?

Briscoe:Â  I am a former Ebony Fashion Fair model, educator, national entertainment and sports reporter for Houston Style Magazine, and an entrepreneur. Being a young woman of color, I have amassed many successes, along with failures. One of my accomplishments that I will always treasure is being the first minority publication to cover the ESPYS since it’s twenty year inception. Connecting people is what I do, and I have been compared to a real-life Olivia Pope. I received my undergraduate degree at Louisiana State University, masters at Texas Southern University, and I am also a graduate of the Bush School of Homeland Security.Â  The latter credential helped me sharpen my skills as a proven problem solver, and I love a “crisis.”

Being a young woman of color, I have amassed many successes along with failures. I have learned most from my failures, which were merely teachable moments. Being an educator doesn’t rest in the classroom but everywhere I go, because I have made a life-long mission to “reach one, teach one.â€ As a woman of power, I utilize my network, expertise, and credentials to help others. Building wealth means creating an individualized team with common goals.

Cooper:Â I am a mother of two who hates the label “single mom,” and is a one-woman multimedia machine. I call myself a “Web Goddess.â€Â  After graduating from Texas Southern University, I’ve worked my way around the Houston block, kicking down many doors along the way. This spring, I moved up to serve as digital executive producer and content manager for CW39 NewsFix, and I am the first African American woman to hold the position of Web department manager at a Houston television news station.

What I am most proud of is my personal blog site, NewsWithAttitude.com, which is my “little engine that could.â€ I am also on the board of directors for the Houston Greeters, I and am the VP of multimedia for the Houston Association of Black Journalists.

Since breaking into the business less than a decade ago, I have added prestigious journalism awards to the mantelpiece with my Web teams, including an Emmy, several Edward R. Murrow, Associated Press Awards, and Lone Star Press Awards; nine combined. This is something I am very proud of.

Tell us about Sister 2 Sistah and when this initiative took flight?

Briscoe: When Nakia and I come together, we are a fearless combination–sometimes the most feared, because we are a dynamic duo who complement one another.

Cooper: We met through a makeup artist we both used, and we hit if off immediately.

After sharing stories of the challenges women of color face in the media and realizing that each were undeniable forces to be reckoned with, we decided to join [together] to help others. We were both mentors to many young women over the years, and after sharing their heartbreaking stories with each other, we decided to put everyone under one umbrella–and Sister 2 Sistah was born.

What was the “a ha” moment for you that sparked action for you to begin this movement?

Cooper: One summer while working at a station, I had three girls sent to me, at different times, by a TSU professor with assignments to shadow me for a day. Now, most of the time they would learn the ins-and-outs of the media biz, but the conversations always turned personal. They each began to share private parts of their lives and their struggles.

Briscoe: Young women of color are under attack. They are the most under represented populations when it comes to social issues. We realized from the influx of calls, emails, and messages received from young women that we needed to move fast.Â  We also began to reach out to college campuses to alert those in charge that something was happening with too many girls. In order to change our community, we have to become proactive and actively involved.

How are you able to balance full-time careers while giving 100% to empowering women of color through Sister 2 Sistah?

Cooper: Honey, it ain’t easy! The only clear answer is determination and dedication, and relying on the village we have managed to grow to help out along the way. We keep our Sister 2 Sistah mentees active in the community, and have found that people want to help out.Â  One of the main goals is helping the girls maintain good grades in college–most of them are on the Dean’s List–and we help them land stellar internships that are instrumental in shaping their futures.

Briscoe: Sister 2 Sistah has gained the support from elected officials, including Texas Lt. Gov. Dan Patrick, Congresswoman Sheila Jackson Lee, and many business leaders. We are hoping to partner with the Congressional Caucus on Black Women and Girls this fall.

Most recently, the Sisters were able to enjoy an all-expense paid trip to New York City to see the Broadway play,Â Eclipsed, and met Academy Award-winning actress Lupita Nyong’o and the producers of the show.

As a result of our humanitarian efforts, we have solidified a three-year partnership with loveisrespect.org and the NOVO Foundation to conduct research and provide community outreach for women of color.

What three key pieces of advice do you have for women of color who want to make an impact professionally and within their communities?

Briscoe: Have character, be polite, and always under promise but over deliver.”

Cooper:Â  Be aggressive, keep it classy, and always know when to strike.