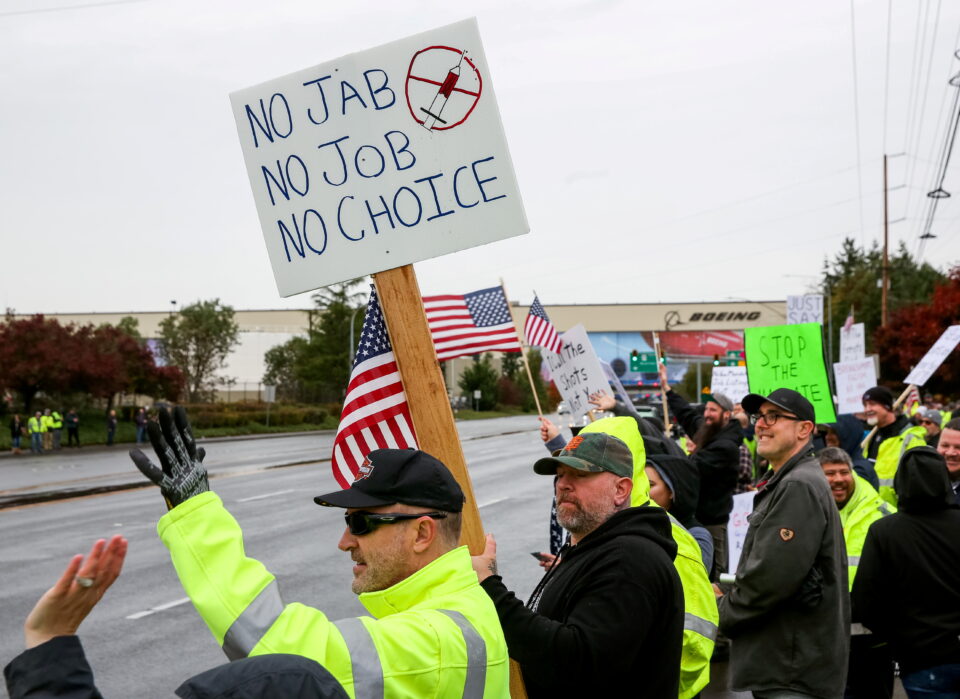 FILE PHOTO: Boeing employees and others line the street with signs and American flags as they protest the company's coronavirus disease (COVID-19) vaccine mandate, outside the Boeing facility in Everett, Washington, October 15, 2021. REUTERS/Lindsey Wasson

Reuters – Thousands of unvaccinated workers across the United States are facing potential job losses as a growing number of states, cities and private companies start to enforce mandates for inoculation against COVID-19.

In the latest high-profile example, Washington State University (WSU) fired its head football coach and four of his assistants on Monday for failing to comply with the state’s COVID-19 vaccine requirement. The coach, Nick Rolovich, had applied for a religious exemption from the mandate earlier this month.

Thousands of police officers and firefighters in cities like Chicago and Baltimore are also at risk of losing their jobs in the coming days under COVID-19 mandates that require them to report their vaccination status or submit to regular coronavirus testing.

While controversial, the mandates have been effective at convincing many hesitant workers to get vaccinated against the virus, which has killed more than 700,000 people in the United States. Some 77% of eligible Americans have received at least one shot of a vaccine, White House COVID-19 response coordinator Jeff Zients told reporters last week.

In Chicago, Mayor Lori Lightfoot has been battling with the police union, which came out against the vaccine mandate for city workers. About a third of the city’s 12,770 police employees missed a Friday deadline to report their vaccination status, and some officers have been put on no-pay status.

“Fundamentally, what this all is about is about saving lives. It’s about maximizing the opportunity to create a safe workplace,” Lightfoot said on Monday, accusing the union of tying to “induce an insurrection” by opposing the mandate.

Chicago Fraternal Order of Police union president John Catanzara did not respond to a request for comment.

The White House, which announced sweeping vaccine requirements in a bid to reduce hospitalizations and deaths from COVID-19 in the wake of a surge driven by the highly contagious Delta variant of the coronavirus, has been a major catalyst behind the inoculation push.

On Friday, some 200 Boeing Co employees and others staged a protest over the planemaker’s requirement that 125,000 workers be vaccinated by Dec. 8, under an executive order issued by President Joe Biden for federal contractors.

The rules for another order applying to private businesses with 100 or more employees are expected to be finalized soon.

Along with the mandate for federal workers and contractors, Biden’s vaccine requirements will cover roughly 100 million people, about two-thirds of the U.S. workforce.

The White House has been meeting with executives of several major companies to discuss Biden’s private-sector COVID-19 vaccination plan.

A wave of layoffs has already swept through the healthcare industry, which moved more quickly than others to impose vaccine mandates given the heightened COVID-19 exposure risk for patients and staff.

Nurses and other healthcare workers who chose to leave their jobs rather than be immunized recently told Reuters they could not get past their concern over a lack of long-term data on the three vaccines available in the United States.

While the vaccines received emergency use authorization from the Food and Drug Administration in less than a year, medical experts have widely vouched for their safety, citing years of research, large clinical trials and real world data after hundreds of millions have been vaccinated worldwide.

Like WSU’s Rolovich, many unvaccinated workers seeking an exemption have done so on religious grounds. It was not clear how a university committee in charge of weighing such exemptions ruled in his case.

School leaders said the mandate was aimed at ensuring the safety of its faculty and staff.

“Experience is showing that vaccine mandates help motivate people to complete the vaccination process,” Marty Dickinson, WSU Board of Regents Chair, said in a statement.

(Reporting by Nathan Layne in Wilton, Connecticut and Nandita Bose in Washington; Editing by Bill Berkrot)