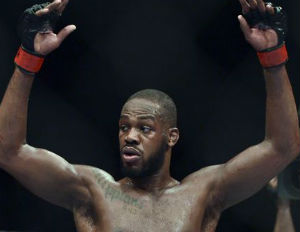 According to an ESPN report, UFC light heavyweight champion Jon Jones has been stripped of his title as of Tuesday, after turning himself into police following a felony charge obtained in an alleged hit-and-run incident in Albuquerque, New Mexico. In response to the three-car accident, Albuquerque police issued an arrest warrant, which claimed that the victim of the hit-and-run, a pregnant 25-year-old woman, had suffered a broken arm and a wrist injury. According to the police report, obtained by ESPN, “witnesses saw a man fitting Jones’ description leave the silver SUV that struck the woman’s vehicle before stopping and returning to the car to grab a ‘large handful of cash.’ The man then ‘shoved the cash into his pants’ and fled the scene.â€ The vehicle was identified by police as a rental, and reported that it contained a marijuana pipe, and marijuana.

Jon Jones, 27, became the youngest UFC champion in history back in March 2011, and is currently considered the best pound-for-pound fighter in the world. With a record of 21 wins and 1 loss, and after successfully defending his title eight times, Jones was scheduled to defend it once more at UFC 187 on May 23rd, against Anthony Johnson at the MGM Grand in Las Vegas. Yesterday, the UFC announced that Jones was suspended indefinitely, and pulled him from the upcoming match. His replacement in the match is Daniel Cormier, whom Jones defeated back in January, and who will now fight Johnson for the vacant title. Cormier appears eager for another shot at the title and minced no words when speaking with UFC Tonight about Jones’ actions – “Jon did this to himself; the belt is not his anymoreâ€, he says during the interview.

In addition to the suspension, Jones has also been hit hard in the pockets, as he was dropped by Reebok, who terminated his endorsement contract this morning, reports MMA Weekly. This loss follows a split with Nike back in 2014, and the value of those deals remains undisclosed as this time. MMA Weekly does note that Jones most recently made $500,000 for defeating Cormier in January, plus additional bonuses for which the value hasn’t been disclosed. ESPN analyst Darren Rovell first reported the Reebok termination via twitter, and then followed it up with this:

When FOX Sports News asked UFC President Dana White about the situation regarding Jon Jones, he responded, “He’s very disappointed. He’s upset. He wanted to go down as one of the greats or the greatest,” UFC president Dana White said on “Fox Sports Live” of Jones. “He’s disappointed, but it is what it is. It is the decision we had to make.

“For us to go in and have to strip him of his title and suspend him is not fun, but you know what they say: The show must go on.”

Jones currently remains free after posting a $2,500 bond on Monday night., he recently posted this to his twitter account:

Got a lot of soul searching to do. Sorry to everyone I've let down.