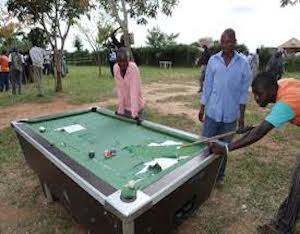 NPR’s show, “Planet Money,” is a program that is all about displaced individuals and their place within the world economy.

The new episode featured a man named Mohammed Osman Ali, who is described as the only refugee in the world running a for-profit arcade. The enterprising young man holds court in the southern region of Uganda, near the border of Tanzania, where the Nakivale exists.

Founded in 1960, Nakivale is one of the world’s oldest and largest camps, which shelters 56,000 people. With more than half of them children and young people, Ali is creating a safe hub for those who experienced extreme conflict in countries like Rwanda, Burundi, Somalia, and the Democratic Republic of Congo through video games.

Since most displaced individuals are not allowed to hold employment, Uganda is encouraging entrepreneurship amongst the populace. Ali is one of the few people developing unique opportunities within the region. In less than a year, he has managed to put together an original PlayStation One, which looks more worst for wear, and a FIFA football game. Using a working diesel generator to power the devices, Ali charges 500 Ugandan shillings ($0.20 USD) to residents of Nakivale for 10 minutes worth of gameplay.