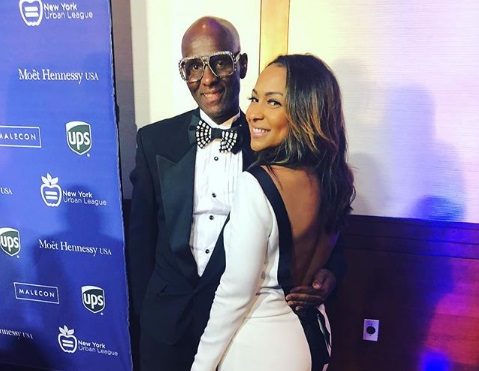 It was a night of celebration, inspiration, and black excellence at the New York Urban League’s annual Frederick Douglass Awards Dinner on Tuesday. This year, dozens of influencers, leaders, and luminaries applauded the astounding achievements of three esteemed African American trailblazers: Google executive Valeisha Butterfield Jones, fashion innovator Dapper Dan, and Next Management President Kyle Hagler. In addition, the ceremony serves as a fundraiser to support the organization’s mission to foster equality and change through scholarships, programs, and initiatives.

New York Urban League President Arva Rice said each honoree was chosen for paving a pathway of access and mobility for other people of color within their respective industries. “Looking at the influence that Dapper Dan has had, not only on his culture but fashion as a whole is so moving. Drawing inspiration from his resilience to pursue his dream and his recent resurgence we felt the history of this living legend had to be told,” said Rice in a statement. She added, “Kyle and Valeisha are amazing representations of how we as a people have evolved to break barriers and to achieve our highest capabilities.”

During their acceptance speeches, each honoree shared inspirational gems about their work and impact on society. Here are a few nuggets.

As Google’s Global Head of Women and Black Community and Engagement, Butterfield-Jones advocates on behalf of minorities at the tech giant as well for diversity and inclusion in the industry at large. While accepting the Ann S. Kheel Award, she stressed the need to strive for progress when it comes to black women not only in the tech sphere but also in politics and entrepreneurship. Here are the stats she shared:

Dapper Dan was honored with the Icon Award for the mark that he has made on fashion. During his acceptance speech, he talked about the struggle he’s faced as a black man in fashion earlier on in his career. “When I tried to do something positive in my community, and I tried to open up a store, I couldn’t get businesses to sell to me because I was black.”

Rather than doing business with the influencer, high profile brands have been accused of appropriating Dan’s style. Gucci, for instance, featured a fur bomber jacket with puffy sleeves in its Resort 2018 collection last year that looked almost identical to a Louis Vuitton monogrammed jacket Dan created in the ’80s. After outraged social media users called Gucci out for stealing the style without giving Dan proper recognition, Gucci creative director Alessandro Michele called the jacket “an homage” to Dan. Gucci also made amends by recently partnering with Dan to open a new store in Harlem, N.Y. and providing him with funding and support.

Hager, who was honored with the Frederick Douglass Medallion for Leadership and Service for his role in pushing for representation and guiding young people of color in the pursuits of their modeling dreams, paid tribute to Frederick Douglass, himself, and black women, who taught him that “self-actiulization and perseverance [is] the only path to true success.”