Valerie Graves Talks Becoming The Woman I Pretended To Be 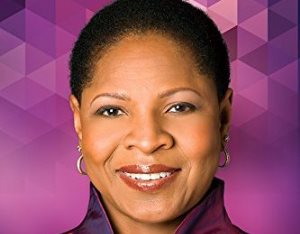 Valerie Graves spent decades creating award-winning advertising campaigns from using hip-hop artist Ludacris to sell Pontiac cars to featuring Steve Harvey in Burger King advertisements. Graves has earned a reputation as a leading creative woman and advertising executive in the Mad Men world of advertising. In fact, she was named one of the Best and Brightest in the industry by Adverting AgeÂ magazine.

In her first book, Pressure Makes Diamonds: Becoming The Woman I Pretended To Be (Open Lens, 2016), Graves paints the picture of how she was a determined woman who faked it till she made it–and made it big. The inspirational memoir recounts her story as an African American teenage mother who fights her way out of the projects into working in advertising in Detroit during the 1970s.

Fake It Til You Make It

Graves was surprised to become a teenage mother, but still determined to make a better life for herself, she worked and went to college. She eventually ended up as a copy editor, a chief creative officer at an ad agency, and vice president at Motown, where she developed products for top brands like Clairol and Coors. Then in New York, she used her uniqueness to become one of the top ad writers on Madison Avenue and beyond.

In the book, she jests about her arrival on the New York advertising scene and how white colleagues assumed she was the daughter or niece of Black Enterprise founder and publisher Earl G. Graves Sr., a Brooklyn, New York native. She never allowed anyone to linger upon that impression, although she might have benefited from it. “No I would reply, I’m one of the Michigan Graves,â€ she writes.

Graves’s memoir shares her own perspectives of black culture–based on internalized racism and colorism. She also draws on her experiences and points of view related to black culture when she creates ads aimed at black consumers. She describes her one in a lifetime experience of being selected for the national ad team for Bill Clinton’s first presidential campaign run.

Founded in 1969, UWG is one of the longest standing black-owned agencies (No. 6 on the BE Advertising Agencies list with $21 million in revenues for 2015). Known as one of the “founding fathers of multicultural advertising and marketing,â€ Byron Lewis built UWG out of necessity and ended up changing an entire industry in the process.

As America becomes more multicultural, Graves notes how many corporations have begun taking a total market approach when trying to reach consumers, rather than looking to multicultural, black-owned ad agencies.

Related Story: Is Total Market the End of the Multicultural Advertising Agency?