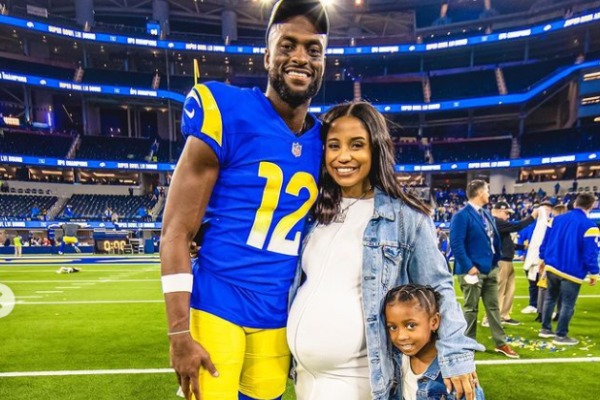 Jefferson had to miss the post-game celebration after the Rams beat the Cincinnati Bengals 23-30 victory. While Jefferson was playing, his wife, Samaria, was rushed to a hospital after going into labor, ESPN reported.

Hours after the Super Bowl win, Jefferson took to Instagram to debut his newborn son to the world.

“It was a great day, bro,” Jefferson said on Instagram Live. “I got three prizes today — my wife, my son and the Super Bowl.”

Jefferson admitted that he and his wife haven’t decided on a name for their baby boy yet.

Samaria was due on February 17. Samaria attended the game but left on a stretcher to go deliver their baby. Cameras captured her being taken to the hospital.

Van Jefferson's wife, Samaria, went into labor during the game, per @JourdanRodrigue.

The Rams receiver grabbed his daughter, sprinted through the locker room, and is headed to the hospital right now.pic.twitter.com/m1zIYGNgSb

Jefferson was in full daddy mode before and after the game. He attended his daughter’s father-daughter dance on Friday, two days before the Super Bowl.

After the game, Jefferson reportedly grabbed his daughter and “sprinted through the locker room” to get to the hospital. Jefferson’s father told reporters that “the midwife said she has about an hour to go before birth,” CBS News reported.

Jefferson and Samaria are high school sweethearts and now parents of two.