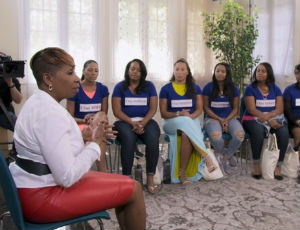 “When I looked at some of the images and stereotypes portraying women of color, it was very disturbing. But, when I looked at how we participate in it? I said, ‘Ok, something’s going on here. Let’s have a conversation.'”

That’s the mission in the four-part premiere of OWN’s award-winning series,Â Iyanla: Fix My Life. In this new season, minister, healer, and spiritual life coach Iyanla Vanzant invites eight women to move into a “House of Healing,â€ to challenge and ultimately dispel the “angry black womanâ€ myth.

It doesn’t stop there–in the multi-week premiere, Vanzant also tackles the misperceptions African American women contend with and how that is reflected in their behavior and cultural identity. Iyanla, armed with her signatureÂ no-nonsense approach and reverberating message of self-love, says the “angry black womanâ€ stereotype is inaccurate, untrue, and dangerous.

“I’m very sensitive to how people of color are depicted, particularly women. Are we angry? Absolutely, but no more angry than anyone else. The challenge is that none of us–black, white, male, female–have been taught how to appropriately express emotion.â€

The chosen women come from a range of backgrounds and occupations, and they all struggle with a range of abusive pasts and abandonment. These women, along with Iyanla, pause to examine their feelings and pain, in order to move past underlying issues and create positive patterns of communication.

“Sadness, disappointment, and fear–as black women, we’re not allowed to have any of that. We’re almost expected to behave badly. It’s a stereotype, and now we are participating in the prostitution of our pain through this behavior, and I wanted to know why. There’s so much in the underbelly of that anger, and no one ever asks about it.â€

But, her work doesn’t end with the women. In future episodes, Iyanla invites six black men struggling with broken spirits and broken hearts to help them reject definitions that hold them back and embrace those that honor their strengths, culture, and relationship to society. The men–which includes a man attempting to build a life for himself after numerous stints in jail, a former singer struggling with feelings of abandonment, and a father looking to mend a relationship with his famous socialite daughter–grapple with their identities, due to the effects of feeling criminalized, dehumanized, and victimized.

In addition to the work at the House of Healing, Iyanla visits and works with a family that struggles because the father is often not present, leaving the family for days at a time. Â She also works with Powerball winner Marie Holmes, who is overwhelmed by the pressure of her fortune.

Iyanla: Fix My Life premieres on Saturday, September 10 at 9:00 p.m. ET/PT on OWN: Oprah Winfrey Network.