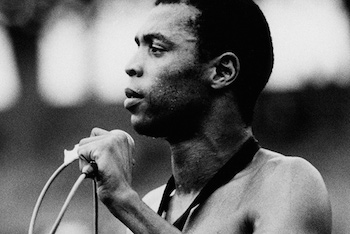 Oscar award winning filmmaker Alex Gibney (Enron: The Smartest Guys in the Room) has finally allowed the first trailer to Finding Fela available to the public.

The documentary is slated to begin its theatrical run around the country on August 1. The aim is engage New York cinephiles first with an exclusive screening at the IFC Center. Washington, D.C., Boston, and Atlanta all have dates in August as well.

Finding Fela showcases the phenomenal power, prowess, and prose of the late Afrobeat musician. It will take viewers in-depth into his life, his loves, and his social and political importance inside and outside of Africa. For those unfamiliar with this pioneering performer, Fela Kuti was influential in developing not only Afrobeat (a fusion of Jazz, traditional West African rhythms, Funk, Highlife, and psychedelic rock), but he also displayed great courage and fight in challenging the Nigerian government.

Audiences will journey alongside Kuti and his band as they affect political and personal change within the Motherland. “I’m very proud of ‘Finding Fela’ and am delighted that the film will have a robust theatrical release in North America,” director Alex Gibney said. “Audiences can experience the story and the power of this extraordinary performer and fighter for social justice.” The documentary promises never-before-seen footage of Fela’s major market concerts and even his funeral.

Produced by Jigsaw Productions, Knitting Factory Entertainment, Okayplayer, and OkayAfrica – you can enjoy the Finding Fela trailer for yourselves below!