[VIDEO] Have The Roots Gone Pop In New Kellogg-Themed Concert?! 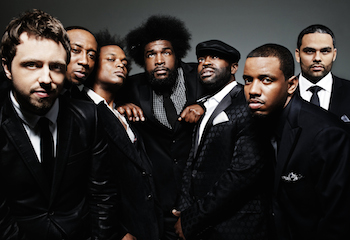 There was a time when fans of The Roots were the only ones interested in granola bars and healthy eating. Now, the super-legendary group from the city of Philadelphia are celebrating milk and cereal in an effort to help Kellogg’s promote its products.

Has this made The Roots more subversive than ever or just capitalizing on their fame to cash checks? After opening with a Cymande breakbeat at the Kellogg’s Recharge Bar, the band began what would eventually be a unique and innovative concert that professed the benefits of having a great breakfast.

The Roots’ armed with milk and cereal inspired instruments, which included bowls, spoons, milk jugs, and more, showcased the group’s artistic skill. Joined by seven students from Philly’s Creative and Performing Arts high school, The Roots had the crowd transfixed as they put on for the culture. “No lie, there’s like 20 3-year-olds here. It’s like a preschool,” a staffer said. This is a totally different crowd than the ones the crew performed in front of alongside Dave Chappelle two weeks ago. The legendary Illadelph collective were also at Hot 97’s Summer Jam sandwiched between Wiz Khalifa and Nicki Minaj. In addition to their in-house band duties for The Tonight Show, it seems that The Roots have transitioned from underground Hip-Hop showstoppers to a dynamic powerhouse force in pop culture.

Able to shape their sound into any format, The Roots are straddling a line that finds them challenging their contemporaries (…and then you shoot your cousin is their latest project to soon be released) and establishing themselves as the top band in the land. The Roots’ partnership with Kellogg’s was meant to show families how a serving of their breakfast food and one cup of skim milk can help start one’s day in an extraordinary way.

“A good breakfast is the gateway to a great day and through our partnership with Kellogg’s we hope to build awareness around the importance of protein and grains for a nutritious start to the day,” Ahmir “Questlove” Thompson said. “Additionally this partnership affords us the opportunity to give the hard working students at the High School for Creative and Performing Arts (CAPA) in Philadelphia much needed support to help them continue to grow as musicians and chase their dreams.”

The group whom also got their start as students at CAPA have consistently given back to their community. But, we here at Black Enterprise, must ask you the reader, have The Roots gone pop along the way?