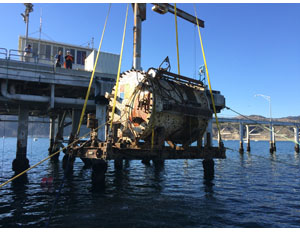 “Fifty percent of us live near the coast. Why doesn’t our data?â€ asks the team of Project Natick, a prototype underwater data center built by Microsoft engineers.

Data centers are the backbone of cloud computing. They contain all of the hardware and processing power–via groups of networked computers. They are traditionally very difficult to maintain and to cool. By exploring the possibility of operating underwater data centers, the hope is to offset some of the expense and challenges of managing data centers.

The data center-under-the-sea is in the Pacific Ocean. It is a 38,000-pound container that measures 10 by 7 feet–minuscule when compared with the expanse of the ocean. The data center’s cylindrical shape is based on the form of submarines.

Project Natick is not too far offshore, so it can hook into the area’s existing power grid. However, researchers are looking into the use of hydrokinetic energy from waves and tides for alternative power.

There are also some unique problems that placing a data center underwater can solve. First, doing so can speed data transmission, say the researchers. Half of the world’s population lives within 120 miles from the sea, reducing latency caused by distance during data transmission.

Second, the sea is a cold place. One of the biggest expenses in managing data centers is cooling. Having a data center underwater makes them less costly to operate and more energy efficient.

The team built Project Natick in 90 days. It only took a day to deploy, install and power under water. This means there is the possibility of mass producing these underwater data centers in a quick turnaround time.

Although a diver goes underwater once a month to check on the container, Project Natick is monitored on land. The team uses cameras and sensors to remotely record data including temperature, humidity, power usage, and even the speed of the currents.

The team is also watching to see if the data center has any ill effects on aquatic life.

“What was really interesting to me, what really surprised me, was to see how animal life was starting to inhabit the system,â€ says Christian Belady, general manager of data center strategy, planning and development at Microsoft. “No one really thought about that.â€

Norm Â Whitaker, head of special projects for Microsoft Research NExT, found it “really edifyingâ€ to see the sea life crawling on the vessel, and how quickly it became part of the environment.

“You think it might disrupt the ecosystem, but really, it’s just a tiny drop in an ocean of activity,â€ he says.

Watch the video below of Project Natick.