We Must Re-Engage In The Battle for Equal Opportunity 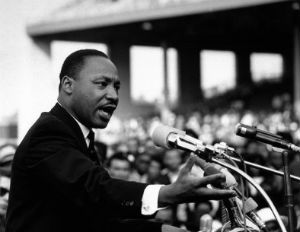 Somewhere along the way, we stopped fighting. Somewhere between “We Shall Overcomeâ€ and “Yes, We Can,â€ we became satisfied, complacent. Somehow we forgot that, in the words of Frederick Douglass, power indeed concedes nothing without a demand. Doors to opportunity rarely spring open of their own accord. As a result, African Americans are becoming marginalized in nearly every area of economic participation and advancement, as affirmative action has given way to a brand of diversity that means virtually anyone but black people.

All of which raise the questions: Where are the agitators? Where are those willing to step into harm’s way, to use their talents, abilities, and influence to make a difference on behalf of the advancement of all African Americans, not just a highly visible and celebrated few? Where are the fighters, the champions?

The answer for too many of us: Leave it to the good Reverends Al Sharpton and Jesse Jackson, National Urban League CEO Marc Morial, and a handful of others–when we’re not denigrating their methods, snickering about their flaws, and otherwise minimizing the value of the hard, thankless work of seeding the soil for the empowerment and political, business, educational, and career success of others.

We seem to have forgotten that economic reciprocity is only supplied in response to our consistently and resolutely communicating that it is our absolute expectation. It is not unreasonable to expect that, if black Americans comprise 15% of the consumer marketplace that fuels our nation’s economic engine, we should also represent 15% of its workforce, corporate contracts, advertising spending, senior managers, and board seats. The reality: We often represent less than 2% practically across the board.

We seem pacified by the image of a small number of African Americans in highly visible positions of celebrity and privilege, but who are often more focused on preserving security, status, and their positions on the A-list, even as an economic holocaust unfolds in the very African American communities that idolize them. The initial wave of exceptional black corporate soldiers (such as the late equitable executive Darwin N. Davis Sr. and the late GM board member Rev. Leon Sullivan) who shattered barriers to C-suites and boardrooms and groomed a generation of protÃ©gÃ©s, has been replaced by the beneficiaries of their pioneering efforts, too many of whom are more focused on what they have to lose than on how much more all African Americans have yet to gain. Whether satisfied by our success, or neutered by the fear of losing it, the result is the same–too many of us are standing idly by as legislation is being proposed to neutralize our voting rights, substandard schools blunt our ability to compete for employment, and black entrepreneurs and companies are excluded, pushed toward the margins of our economy.

Here’s the truth, as directly as I can put it. We have not overcome. Rather, we are in danger of being overcome. We risk losing all of the ground gained and then some, in terms of economic advancement and opportunity prior to the last couple of decades. We need to wake up, step up, and rejoin the battle for opportunity, and the unfinished business of all African Americans participating fully in the bounty of our economy as producers, decision makers, and partners, not just as consumers and laborers.