Walmart Stops Sale Of "All Lives Matter" Merchandise Amid Backlash 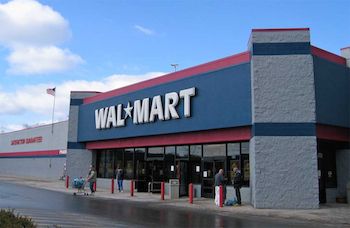 The protests over the deaths of several Black people killed by police officers — including Breonna Taylor, Ahmaud Arbery, and George Floyd — has pressured numerous corporations around the country to take action.

Earlier this month, Starbucks faced heavy scrutiny after an employee accused the company of denying his right to wear Black Lives Matter merchandise while at work. This week, Walmart announced that it will stop the sale of “All Lives Matter” merchandise from its online store and Canadian online storefront in addition to indefinitely removing all items sold through third-party sellers. The move comes in response to several employees and customers on social media expressing their concern behind the meaning of the merchandise.

“Not only does @Walmart systematically destroy small businesses and small town economies, but they also sell “All Lives Matter” and “Blue Lives Matter” merchandise on their website. They’re truly one of the largest cancers in the US,” said one user on Twitter.

“We fundamentally believe all lives do matter and every individual deserves respect,” Walmart said in a statement to USA TODAY. “However, as we listened, we came to understand that the way some, but not all, people are using the phrase ‘All Lives Matter’ in the current environment intentionally minimized the focus on the painful reality of racial inequity.”

Despite the gesture, the store “will continue to sell other variations, including ‘Blue Lives Matter,’” a spokesperson for the company told NJ Advance Media.

According to Atlanta Journal-Constitution,  Walmart Canada says that it “stand[s] against any form of racism or discrimination. We promote listening, seeking to understand, and embracing individual differences. Today, our third-party marketplace has a number of items with variations on the phrase ‘lives matter.’ We will continue to review those items to ensure compliance with our terms and conditions.”

Previously, Walmart said it would no longer display the Mississippi state flag, which features the Confederate emblem, in its stores after the state legislature voted to remove the symbol.