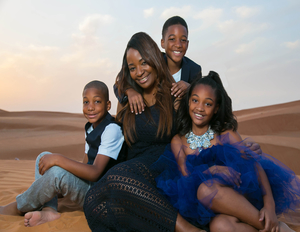 Tanai Benard is, in a word, fearless. A devoted mom who makes no apologies for leading boldly from the front, her commitment to family has spurred a global movement that has changed the landscape for single moms and their childrenÂ forever.

In 2013, in the midst of marital strife, Tanai and her husband planned a move from Texas to the Arabian Gulf, along with their three children, in hopes of a fresh start and a better life. What’s more, Tanai had just accepted a position as a teacher in Abu Dhabi with numerous perks, including, among other things, housing. On all accounts, the transition was destined to be a fortuitous one. Unfortunately, however, their marital woes took a toll before their departure, causing their marriage to dissolve weeks before the move. With her back against the wall and a new life challenge before her, Tanai stood firm. Armed with little more than the courage of her convictions, she moved forward and traveled across the globe with her three minor children ages 5, 6 and 8 in tow. Little did she know, the best was yet to come.

Fast forward three years, and a lot has changed since that fateful day in 2013. But Tanai has never looked back. Her children are excelling both academically and socially. They’ve even learned to speak and write Arabic. Plus regular, international travel has become commonplace for “4 Deep,” which the family unit is affectionately called. Moreover, Tanai has made a name for herself as a standout professional in academia, earning the respect of her colleagues and community alike. With the family doing well financially to boot, the move has proven to be one of the top ‘boss moves’Â of her life and we can certainly see why. Bravo, mama!

BlackEnterprise.com caught up with this ‘wandering mom’ extraordinaire to talk all things leadership, family, and international swag.

BlackEnterprise.com: YouÂ took a bold step moving from the United States to the United Arab Emirates (UAE). How did you know it was the right thing to do?

Benard: I’ve made a lot of decisions in my life based solely on emotions. Oftentimes, these emotionally- driven decisions were motivated by desperation, especially when I was looking to escape a negative situation. However, my decision to move to the UAE was different. I had long stopped searching for the ‘next great thing’ when this opportunity presented itself. I was unfamiliar with the UAE and had never considered moving abroad, but, I thought, ‘Why not?’

I researched the country and discovered how living as an expatriate might be for us. I weighed the pros and cons of working and living abroad, but most importantly, I prayed. By the time I’d made the decision to move, I knew in my spirit that it was right. I was at peace, without fear and knew that no matter what; this was the path I needed to take. Instead of running away, I was sprinting towards something: a new life and a greater opportunity. Thankfully, I have not second-guessed my decision since moving here.