Want to Boost Your Credit Score? Pay Your Parking Tickets 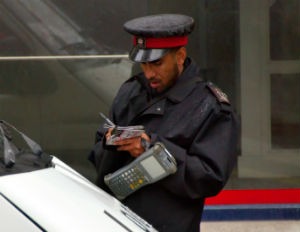 I once interviewed a young man in Washington D.C., named Omar Al Chaar, who routinely got parking tickets on Thursday nights when he would park near the Department of Justice for their weekly basketball game.

“My time would expire at 7PM and at 7:02 I would come out and he had written me a ticket and he’s driving away at 7:01, and the funny thing is, it’s always the same guy,â€ he told me during the interview. Al Chaar became frustrated by all of the tickets and eventually stopped paying them.

What he didn’t know, however, is that unpaid parking tickets — essentially debts owed to a city or municipality – go through the same process as any other unpaid bills:

– Continue to turn a blind eye, and you’re turned over to a collection agency

“There are so many areas of non-traditional credit that is extended to Americans every single day,â€ said The Money Coach, Lynette Khalfani-Cox. “People don’t equate the fact that these things may potentially having an impact on their credit score, but they absolutely can,â€ she added.

FICO (Fair Issac and Company) is the company that takes the information in your credit history and puts it into a mathematical formula in order to calculate your credit score. Lenders use that score to determine if you’re a good credit risk, if they’ll give you a loan, and how much they’ll charge you. FICO scores have a 300-850 range and scores that are 700 or higher, like Omar’s prior to his tickets, are considered strong.

It wasn’t until Omar went to a lender to apply for mortgage loan, that he learned his credit score had plummeted 105 points because of unpaid parking tickets. That’s because payment history — whether or not you pay your bills on time — counts for 35% of your total FICO credit score, and unpaid collections take an even bigger toll.

If you do receive a collection notice due to an unpaid fine to a county or municipality,

– The first thing you need to do is pull your credit report. You can get a free copy once a year at www.annualcreditreport.com

– The complaint will show up in your credit report under a section called “derogatory marks.”

– If it’s accurate: Â pay your fine as quickly as possible.

– If you find an error or if you’ve paid the bill and it’s still showing up, dispute the report

The three major credit bureaus, Experian, Equifax, and Transunion, all have areas on their websites where you can submit written challenges.

As for Omar, he says he learned his lesson, and will pay more attention to what goes into his credit report.