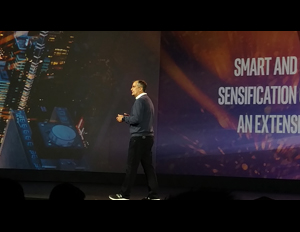 Keynotes from business executives can be dreadful, dreary affairs. Who wants to listen to some suit drone on about how great his company is?

[RELATED: The Best in Beauty, Fitness, and Wellness Tech at CES 2016]

From a drone that followed a bicyclist throughout the arena, to a Segway robot that came upon command like a trusty dog, to Lady Gaga, Krzanich’s keynote captivated the audience.

His keynote even opened with pizzazz: An artist used virtual reality to create art in the air and a dancer set an energetic mood with pulsating, techno music:

Not to be outdone, Netflix’s Hastings threw out some impressive statistics about the company that invented “binge watchingâ€:

–Â Netflix is in half of all households. It took the cable industry 20 years to achieve the same.

–Â 12 billion hours of Netflix was watched in the 4th quarter of last year.

The Crown is a series about Queen Elizabeth II:

The Get Down takes place in the South Bronx and is about the transformation of New York City in the 1970s:

Netflix then invited on stage for a discussion about making content, Chelsea Handler; Will Arnett; the star of Jessica Jones, Krysten Ritter; and Brazilian actor, Wagner Moura.

If all of that wasn’t enough, Hastings then told the audience that during his keynote, Netlfix was just turned on and made available in 130 additional countries.

Now that is how you keynote.