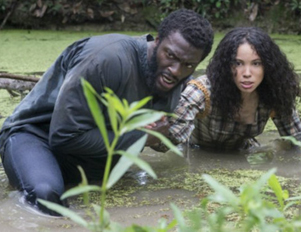 The dramatic thriller is currently in production in Baton Rouge, and is expected to premiere on March 9 on the WGN network. With a star-studded cast, including Aldis Hodge, Jurnee Smollett-Bell, Christopher Meloni, Alano Miller, Jessica De Gouw, and more, and in addition to the amazing backstory, fans have been dying to see a better peek of what’s to come. Legend, past Academy Award and Golden Globe winner, and nine-time Grammy-winning singer-songwriter, paired with Get Lifted Production partners Mike Jackson and Ty Stiklorius to executive-produce the new series. Get Lifted is also overseeing the score, soundtrack, and music. The plotÂ revolves around plantation slaves, who are united in the fight of their lives for their freedom, planning the 600-mile escape from Georgia.

[Related: Cast of ‘Underground’ Reveals What Viewers Can Expect]

Legend stated,Â “We are excited to join forces with WGN America and Sony and the talented team of writers and producers on this powerful project that we believe will inspire us all. This series has a unique opportunity to speak to the passion and courage of those who risked it all as they raced to freedom. We are honored to bring our creative vision to this thrilling project.â€

My name is Noah. I am a slave. https://t.co/qSOXTGab0m

My story as a slave #BreakFree https://t.co/sD6keM3cAQ

[WATCH] Kevin Hart Gets His Own Line of Nike Kicks