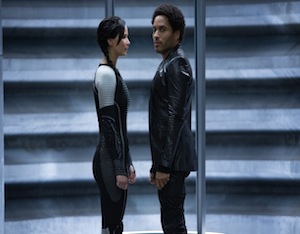 The end is nigh for Katniss Everdeen and Peeta Mellark in the third and final installment of The Hunger Games franchise. Lionsgate has treated fans to a glimpse at what awaits our fated heroes in the form of a new trailer.

“You will rescue Peeta at the earliest opportunity or you will find another Mockingjay,” proclaims Katniss, played by Jennifer Lawrence. For those who missed out on the prior episodes, Peeta has been captured by the villainous Capitol (led by Donald Sutherland) during the Quarter Quell. With Lawrence’s Katniss as the face of the rebellion, the explosive trailer is full of action, drama, and heroic shots of Katniss and Gale (Liam Hemsworth).

This includes a pretty nifty shot of the aforementioned duo shooting down Capitol aircrafts with their super-powered bows and arrows. Audience members can only expect grimness and drama in the first part of Mockingjay‘s story. The third film in the popular Hunger Games franchise will pick up where Catching Fire left off, which finds Katniss making a new home in District 13, after the Capitol burned down her original home in District 12 following the 75th Hunger Games.

All seems at a loss for our heroes as Panem President Snow (Sutherland) continues to play war games with Katniss and the rest of Panem as they resist for their freedom.

The Hunger Games: Mockingjay Part 1 is scheduled to arrive into theaters on November 21. You can watch the trailer for yourself below: