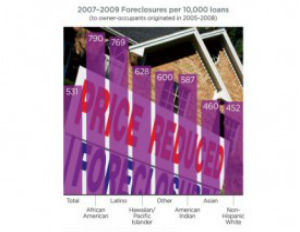 A new study by the The American Civil Liberties Union (ACLU), raises concerns about the ways in which Blacks will be able to provide for future generations. The study found that the racial wealth gap increased dramatically after the housing market collapse, causing economic challenges for Blacks that will affect them for generations to come.

The study found that while all households lost wealth at the height of the crisis, from 2007-2009, White household wealth stopped falling, while Black households lost an additional 13% of their wealth between 2009 and 2011.

“There are a couple of explanations for this,â€ says Rachel Goodman, staff attorney with the ACLU’s Racial Justice Program. “First of all, housing prices have taken much longer to recover and still have not recovered in many communities of color. That recovery started much sooner in affluent neighborhoods,â€ Goodman tells BlackEnterprise.com.

“In addition, many of the foreclosed properties were concentrated in particular communities, pulling down housing prices everywhere. No one wants to live there. That cycle is not playing out in other areas.Â  Add to that the fact that more Black communities were saddled with predatory loans, and you have a tale of 2 recoveries,â€ adds Goodman.

The study also paints a bleak picture in terms of economic rebound in Black communities.Â  By 2031, a typical Black household’s wealth is forecast to be nearly 40% lower than it would have been without the Great Recession. As a result, the overall wealth disparity between White and Black homeowners, which had been forecast to drop to 4.0 by 2031, will instead grow to 4.5.

In addition, the survey predicts that if it weren’t for the Great Recession, by 2050, the home equity disparity would have been nearly erased for the adult children and grandchildren of survey participants. Given the unequal impacts of the recession, however, White descendants are projected to have 1.6 times the home equity of Black descendants.

“We know that home equity is an important part of the household wealth passage for all Americans, but particularly true for families of color,â€ says Goodman.

“Black families tend to have fewer assets invested in the stock market and retirement accounts. Home equity is the source Black families are generally drawing on to help family members do things like pay for college, help with down payments on homes of their own, or leave money in wills,â€ she adds.

As for ways to improve the fortunes of Blacks who finds themselves the report recommends the following:

“Steps can be taken right now to help close the growing racial wealth divide, and to ensure that the next generation has the benefits of assets and savings that bring a more secure future,” says Sarah Burd-Sharps, co-director of the Social Science Research Council’s Measure of America project.