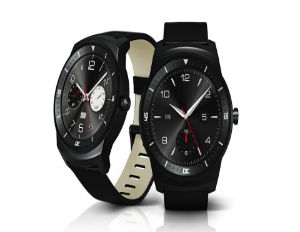 Apple sent out cryptic messages on Friday (Aug. 29) about a launch event scheduled for Sept. 9. The tech giant will reportedly unveil the new iPhone 6 expected to arrive with a lot of fanfare, a much bigger screen, and a new scratch-resistant sapphire screen.

But also expected, though unverified, on the list of new products about to hit the public, is the much anticipated iWatch, Apple’s answer to the martwatches from LG, Samsung, Motorola, and other companies that have already jumped into the game.

Not to be outdone by Apple, Samsung has launched its latest smartwatch, the Gear S, expected to be available early October although no word yet on the price tag. Korean rival LG unveiled its second smartwatch, the G Watch R.

According to a press release, Samsung says the Gear S “designed with an elegant, curved Super AMOLED display and flexible band, Samsung Gear S fits comfortably on user’s wrist. Through 3G connectivity, the Samsung Gear S offers a new, powerful wearable experience and gives consumers the freedom to live their life on the go.”

Let the wearable tech wars begin. We are about to witness an explosion of products on the market. Some people believed that with all the various devices we have to tell the time, demand for watches were about to dip. Smartwatch technology effectively banishes that theory. In the tech game, smartwatches are one of the fastest growing categories. Users can get e-mail, text, and phone call notifications all on their wrist, without having to pull out their cell phone. Users can utilize a heart rate monitor, take photos, all with Bluetooth and GPS capabilities. Only question is, will you wear one?

Wired puts it this way, “It brings the power of the smartphone out of your pocket and into your field of vision, accessible any time you glance its way.”

Analysts say Samsung is the clear leader in this space and launching its new product to get the jump on Apple is a clear attempt to stamp its authority on the wearable tech market.

According to Forbes, the iWatch, “could leverage Apple’s new health and fitness software, as well its connected home framework, and link Â up with your phone for updates and notifications.”