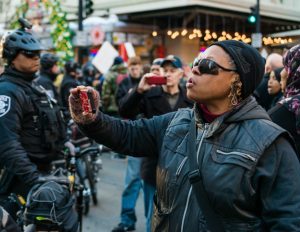 In this week’s edition: Why are chatbots turning racist? Plus, the SXSW festival features shocking crowdfunded documentary about the Mike Brown shooting in Ferguson; more black women drone pilots, please; and more news at the corner of tech, science, and race.

When Chatbots Lack Diversity, This Is What Happens

Black Enterprise‘s Digital Managing Editor Maryann Reid takes a look at how the lack of diversity can lead even chatbots–those automated algorithms that allow humans to naturally communicate with systems–to become racist and biased.

Discussing Racism and Opportunity at SXSW

This year’s South by Southwest (SXSW) festival was the typical exciting mix of cool tech, music, and avant-garde films. Yet, one meet up involved a serious and lively discussion about being black in America and how to turn around the inner cities.

The biggest news to come out of this year’s South by Southwest (SXSW) conference is the showing of the documentary Stranger Fruit, which alleges to reveal the truth about what took place in Ferguson. The film was made through crowdfunding.

Facebook CEO Mark Zuckerberg recently spoke at North Carolina A&T State University, answering students questions about a variety of topics. One student asked about his thoughts on diversity and tech, and, according to Silicon Valley blog Gizmodo, Zuckerberg’s response was an “embarrassingly longwinded, rambling non-answer riddled with misinformation.â€ Well, at least Zuckerberg showed up.

Diverse, a site dedicated to issues in higher education, reiterates just how imperative it is for students to have diverse role models and teachers almost as soon as they begin schooling, especially for success in STEM learning.

A 21st Century Bessie Coleman; We Need More of These Women

DNAInfo has a profile piece on Carmaine Means, a photojournalist who uses drones to take images. According to DNAInfo, “Means is one of the few African American women licensed to pilot drones in the United States–just 4% are women, and Means knows of only three others who are black.â€ Means seems to channel the spirit of the first black woman aviator Bessie Coleman, and hopefully more men and woman of color will get into the exciting world of drone operation.