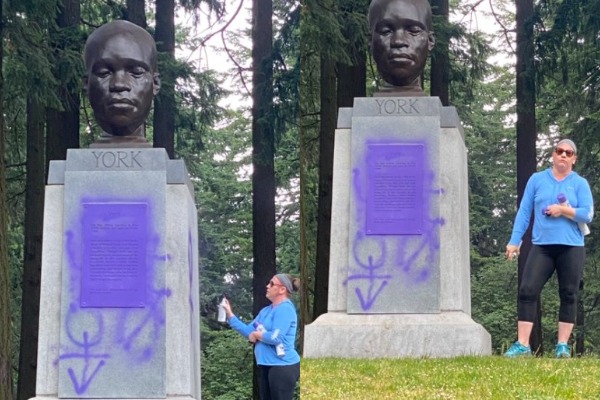 Amid reports of heightened race relations in Portland, Oregon, a witness caught a white woman vandalizing a monument commemorating the only Black person who aided in the Lewis and Clark expedition.

The witness recorded the woman as she spraypainted unintelligible words on the statue Tuesday night, News One reports. It was the second time the monument had been defaced in three months.

Located in Mount Tabor Park in Portland, the bust depicts a slave named York who helped Meriwether Lewis and William Clark explore the West Coast in 1804. It was a biker who rode by and took photos of a white woman holding a can of spray paint after vandalizing the monument.

“I’ve been prejudiced against Black people and Hispanic people,” the woman shouted after being approached by the biker. She claimed that she would pay for the damages she caused if asked, before shouting out “Fu*k you all!”

She said the bust of York upset her because it was put up “to replace a white man with a fu*king Black man. That’s not fu*king unity.”

Had an interesting encounter during a bike ride this morning. A person was defacing the Bust of York statue on the top of Mt Tabor. pic.twitter.com/LbLYut9RGr

The white woman was referring to a previous statue of Harvey Scott, the editor-in-chief of the Oregonian newspaper, Williamette Week reports. Scott was a fierce advocate against women having the right to vote. His statue stood where York’s bust was installed but was toppled over last year during nationwide protests following the killing of George Floyd.

York’s statue was placed there by an unidentified person back in February, Daily Mail reports.

The biker who witnessed the woman defacing the statue described her as “upset” and “shaking.”

“I got the sense that she was really upset about a black statue being there, more than anything. Which is really scary,’ the witness said. “I was really upset. What do I do? Do I grab the can away from her?”

By Thursday there was no word on if the woman was arrested for vandalizing the monument and admitting to it on camera.