White Woman Refuses to Let Go of Black Man Inside Bar, 'I Love You' 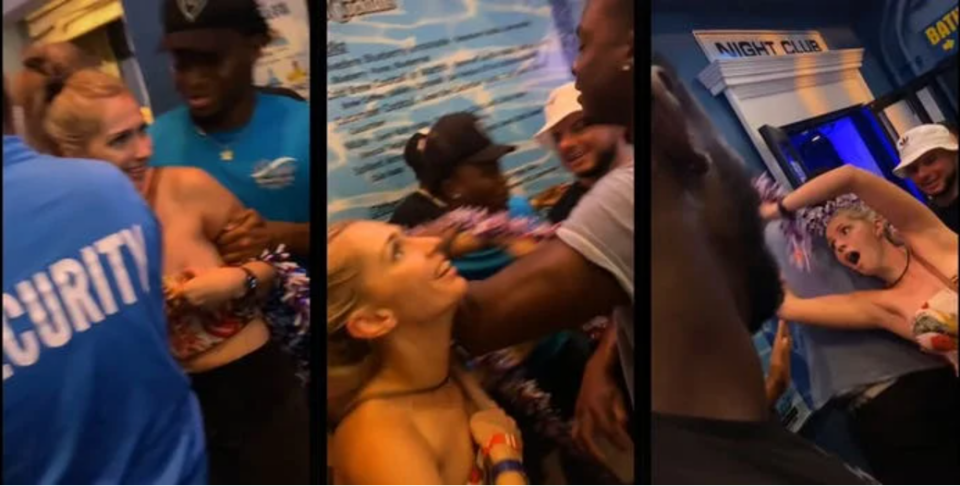 A TikTok video captured the moments a white woman couldn’t keep her hands off a Black man inside a crowded bar..

The video shows the Black man entering a bar, believed to be in New Jersey, and immediately becoming a target for a blonde white woman who appeared to be under the influence.

Clips show the woman following the Black man around the bar and grabbing his neck, arms, shoulders, and chest despite his pleas for her to unhand him. Even when security tried to step in to remove the woman, she refused to let go.

When prying the woman’s hands off the Black man, she told him how much she loved him. All the while, a white male believed to be her boyfriend was right by her side trying to get her off the victim.

“We couldn’t believe she wanted him so bad,” Dennis explained in the video’s overlay text.

“She didn’t even ask for his name.”

The TikToker detailed that the woman started following his friend around “10 minutes” after they arrived at the bar. Viewers couldn’t help but call out the apparent double standards with many saying had the roles been reversed, the Black man would’ve been arrested or worse.

“Idk why everyone automatically goes to ‘If ThE rOles wERe SWitCheD’ like it’s not ok under any circumstance what do you not get,” one user wrote.

“The entitlement to just grab someone and hold on to them while they are visibly moving away from you is wild,” added another.

“Mans avoided a case in the morning. Good call fam” said one TikToker.