Why do boys in areas of higher income inequality drop out more? 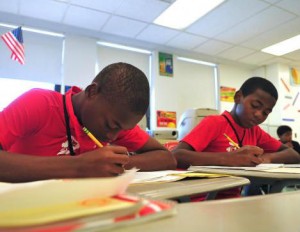 This is the conclusion of research conducted by two economics professors, one a senior fellow with the Brookings Institution.

The states of higher inequality were all in the South: Louisiana, Mississippi, Georgia, and the District of Columbia (which is not a state, of course). The lower inequality states were all northern: Vermont, Wisconsin, North Dakota, and Nebraska.

However, they concluded that the evidence points to greater inequality itself as the reason. It could be that greater inequality creates the perception that a middle-class existence for low-income students is unlikely, leading them to drop out of high school–ironically the one thing that will almost guarantee a lifetime of low earnings and greater unemployment.

Sadly, students of low socioeconomic status, even if they have high test scores, are much less likely to plan to attend college, the research also showed.

The Wall Street Journal, in reporting on these findings, wrote that of boys whose mothers dropped out of high school, about 25% will also drop out if they live in a state of high income inequality; ifÂ income inequality is low, just 19% of such boys drop out.

Two things about this research jump out at me: one is the stark geographical (and cultural) differences between the two areas. The four northern states and four southern states are very different from each other in ways other than just income inequality. Perhaps those cultural differences affect low income students.

The other is–what is it that keeps low-income students in school in states of lower income inequality? Are they all aspiring to be middle class, or is something else keeping them in high school?

“There are important policy implications for what types of programs are needed to improve the economic trajectory of children from low [socioeconomic status] backgrounds,â€ the researchers write. “Successful interventions would focus on giving low income youth reasons to believe they have the opportunity to succeed.â€

I do wonder if these programs are in place in the northern states, and if the experience of poverty isn’t very different in Mississippi from what it is in Nebraska.