Why Malia Obamaâ€™s Gap Year Is the Real News 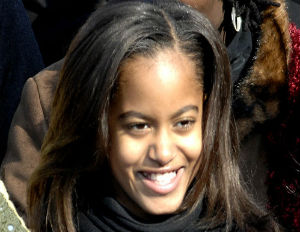 So you’ve heard that Malia Obama, the Obamas’ older daughter, is going to Harvard. That’s exciting, but I think the real news is that she’s taking a gap year. More students should consider taking one.

Although Malia’s case is special–I read that she’s waiting until her father is out of office–a gap year is a good idea anyway.

When my nephew took three years out of his professional life to live and work in Costa Rica–he is now certified reading and writing in Spanish–our family expected him to interact with and meet Costa Ricans and immerse himself in their culture.

What we didn’t expect was his meeting young Europeans from all over the continent. Apparently it’s not unusual for Europeans to travel for a year or two before they start college.

Yet, in the United States, the idea of traveling before beginning college hasn’t caught on, and that’s regrettable. Instead, kids are marching lockstep from high school into their post-secondary lives, and often have no idea what they’re doing there, what they should major in, or even who they are.

Abigail Falik wrote recently in Nicholas Kristof’s New York Times “On the Ground” column about gap years and the American practice of avoiding them. Kristof is a New York Times columnist and ardent promoter of taking time off to travel or pursue other experiences before college.

FalikÂ notes that one-third of college freshmen don’t return to school for a second year; that American students squeeze four years of college into six, and that stress, hopelessness, and anxiety are major players in the lives of college students.

And there’s more bad news, which I’ve written about before: Only 11% of employers say that college graduates are ready for the workforce.

Although a gap year may not be the answer to all these ills, research shows positive effects–like increased maturity, confidence, and achievement.

Just to be clear, for a gap year to produce these kinds of benefits it needs to be purposeful. Some parents of color may be uncomfortable with the idea–fearing a loss of momentum or the allure of less academic pursuits or influences.

But a purposeful, structured year off can be a meaningful time in a young person’s life, and scholarships that make it easier for low-income pre-college students are becoming more available.

Global Citizen Year, an organization FalikÂ founded and leads in support of the gap year concept, identifiesÂ high potential students and provides financial aid to those whose families can’t pay; 80% of each year’s class has received need-based financial aid.

Malia’s going to Harvard, and that’s great. But the real news is that she’s taking a gap year–maybe your son or daughter should too.