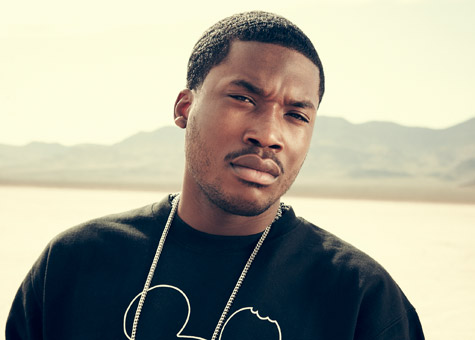 The rapper Meek Mill and NBA guard Dion Waiters -- both Philly natives -- are taking to their backyard for the first-ever Dreamchasers Summit. Their goal? Help young people realize what it takes to help realize their potential.

Put it on da [news] how my Rolls Royce in da hood taking kids on they prom 4 free 2 motivate them to go further in life! — @MeekMill

“See, when I do joints like these, I do it for the youngin’ in the ghetto that you ain’t never going to hear his story cause he ain’t gonna make it to tell you … so, you know, it’s crazy: I went to court the other day, the D.A. say she hate me. How you gonna hate me when me and Lou just took 20 racks and put clothes on them kids backs? It’s 30 degrees outside.â€ — Meek Mill, The Ride

Have you heard Meek Mill’s best song? I heard it a couple dozen times until I heard it before a Wale show. It’s his Intro to the albumÂ Dreams and Nightmares, an elegant, piano-laden endgame of soundtrack that sounds more like an album’s ending than it does a beginning; more of an ode to a life lived than a promise of better days. The crowd, gathered at Times Square’s Best Buy Theater that night, was electric. Standing together they began rapping in unison:

In the back of the paddy wagon, cuffs locked on wrists

It was time to marry the game and I said, “Yeah, I do”

The song went on and on like that, until its bass-heavy climax, where Meek Mill (born Robert Williams) proceeds to rap 32-or-so more relentless, angst-ridden bars, each more furious than the next.

Taking in the scene at theÂ  Wale concert I thought back to the summer of 2012 and the way the addictive, faux-reverence of the artist’s Key Wane-producedÂ Amen had become a bluesy anthem in the central Brooklyn neighborhood where I lived.Â People are listening to this man, I thought. And in a way that they aren’t listening to anyone else.

It’s why what he’s doing with his Dreamchasers Summit on August 30 at Temple University’s Liacouras Center is so intriguing. The event counts Meek Mill, Rick Ross, the NBA’s Dion Waiters, Thaddeus Young and Lou Williams as panelists.

It is not perfect. I’d personally be more impressed if this event was free for the community. (It’s not.)

But for a culture so inspired and influenced so heavily by sports and entertainment, I can’t help but think this is a brilliant start.

“Dream Chasers Sports and Entertainment Summit is to bring together some of the biggest names in both sports and entertainment to discuss everything from chasing dreams successfully to what it takes to make it in the industry as an athlete, musician, entrepreneur and business executive,â€ its website says. “The infusion panel will focus on “dream chasingâ€ and looks to ignite the spark in all generations to go after their goals, no matter what those goals may be.â€

Are they onto something?

Not long after he was released from prison in August of 1952, Malcolm X was granted permission by his parole officers to travel to Chicago to visit with none other than Elijah Muhammad. The story is recounted in the late Manning Marable’s Pulitzer Prize-winning biography of Malcolm, A Life of Reinvention. Elijah Muhammad, delivering a typical sermon during a ceremony he gave hundreds of times, called out Malcolm’s name; Malcolm had written him from jail every day, he’d said, showing dedication of purpose that recalled Job, the Old Testament’s symbol of obedience to God in the face of adversity.

Marable writes that by late 1953, Elijah Muhammad believed it was time to promote Malcolm to minister. After serving temples in Boston and Philadelphia, where he gained confidence in his message and oratorical style, Malcolm was assigned to New York City to preside over Temple No. 7 in Harlem and the rest, as it were, is history.

The first half of Malcolm’s life — the petty crime, the drug peddling, the pimping — is a narrative that consumes and destroys far too many young people and families. The boys and men who emerge unlike Malcolm upon their release from prison don’t have access to employment or opportunity. Malcolm gave so many people hope and, immediately effective in large part because of who he was: a self-taught, principled, a man of the people.

“I am not educated, nor am I an expert in any particular field,â€ Malcolm once said. “But I am sincere and my sincerity is my credential.”

I am not trying to compare Meek Mill to Malcolm. But let’s stop pretending that we can bring about change in the most downtrodden areas of our communities if we’re dealing with entities (read: politicians) who don’t speak the language of the people.

Too often this discourse where we are supposed to be “figuring out” what to do with the poor and disadvantaged always seems to happen in classrooms, on cable television and in closed-door policy meetings.

Coming up with ideas about how to help get people off welfare, how to engage them in pursuing opportunity have the ultimate redundancy of not inviting those same people to the table. These efforts are often well-intentioned, but severely flawed.

But Meek Mill’s appeal lies in his singularity. He’s young and from North Philly. With all due respect to the sometimes hilarious Twitter meme @MeekMillRapLike, his performance language, steeped in the battle-rap-to-DVD tradition, is connected to a very real understanding of suppressed black male aggression and angst, as well the negotiation of conflict and social bankruptcy in poverty-stricken neighborhoods.

So much has been made of this young generation of stars in hip hop, and the adulation they receive is deserved. But for all of the poetical cadence of a Wale, the technical genius of Kendrick Lamar, the introspection of J. Cole, the assonance of Big Sean and Drake, Meek Mill is the only one who actually started from the bottom. He’ll speak on Friday at Temple.

And let’s hope a ton of young people are listening.