Why We Must Continue The Work of Selma To Remake America 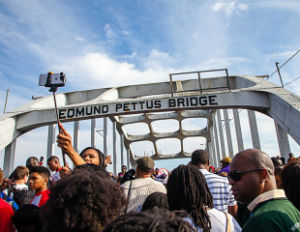 All eyes were on Selma this weekend as tens of thousands— including President Obama and a host of political dignitaries—came to this Alabama hamlet to commemorate a seminal moment in the Civil Rights Movement.

They were in attendance to recognize the 50th anniversary of “Bloody Sunday” —that fateful day when peaceful protesters sought to cross the Edmund Pettus Bridge as part of a 45-mile march from Selma to the state capital of Montgomery for the right to vote. Their attempt was met with vicious attacks from local police officers, resulting in spilled blood and battered bodies. As a shocked nation watched, that day of infamy— and the two subsequent protest marches —would inevitably lead to passage of the landmark Voting Rights Act of 1965.

The bravery of those foot soldiers paved the way for all Americans to gain the opportunity to exercise their franchise and five decades of political milestones, including the election of the first African American president.

In this slideshow, with photos taken by former BLACK ENTERPRISE Associate Art Director Mary Brown, we share with you this exclusive essay of this past weekend’s activities.