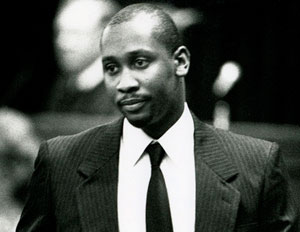 At 11:08pm Eastern time on September 21, 2011, death row inmate Troy Anthony Davis was executed in Savannah, Georgia, for the murder of police officer Mark MacPhail, a crime he was convicted of more than 20 years ago. The battle to prevent Davis’ execution, based in large part on several of the original witnesses in the case recanting their testimonies, began long before the emergence of social media as a dominant influence in our society. Advocates ranging from Amnesty International to President Jimmy Carter, Pope Benedict XVI and former FBI Director and Judge William S. Sessions had taken up Davis’ cause, helping to carry the fight through state and federal appeals and three stays of execution, all the way to the U.S. Supreme Court.

The most recent–and final–battle to get a fourth stay of execution, and more importantly a new trial, enlisted social media, and specifically Twitter, in order to spur activism and awareness of Davis’ plight. The battle reached a fever pitch in the days and hours before the scheduled execution, thanks at least in part to celebrities with large and responsive Twitter followings, including Russell Simmons and Kim Kardashian, calling for a new trial for Davis. In addition to expressing disgust and outrage about the Davis case, Twitter users urged their followers to sign petitions and flood the offices of Georgia Judge Penny Freezeman, the U.S. District Attorney and others with phone calls and e-mails to get a stay of execution for Davis. As a result, Who Is Troy Davis was a worldwide trending topic on Twitter on the days leading to his execution (despite many Twitter users, including Simmons, questioning whether the social media site had deliberately blocked the #TroyDavis hashtag to keep it from trending).

Millions of Twitter users, including many of my followers, honestly believed that if they just tweeted about Troy Davis enough, and could get their followers, and their followers followers, to do so as well, they could get him a new trial at least, and maybe even prevent his execution altogether. Many are heart-broken, disillusioned and genuinely shocked that this turned out not to be the case.

I cared about Troy Davis–not just him, but the millions of others like him behind bars, including the more than 3,000 on death row, according to the Death Penalty Information Center. I didn’t want Davis executed. In fact, I am unconditionally against the death penalty in general, regardless of guilt or innocence (in Davis’ case, I’m not convinced either way), because there is no way to eliminate the flaws in our justice system that inevitably lead to wrongful executions. But I never believed that tweeting about Troy Davis would save his life. Moreover, had his life been spared, it would have had far more to do with the respected and influential people and organizations who have advocated on his behalf over the past two decades of his legal battle than with how many tweets were retweeted over the past couple of months.

(To be perfectly blunt, as a Black man, I’d be terrified of a justice system that could be swayed by trending topics on Twitter. That’s the kind of passionate, popular-opinion mongering that drove the Salem witch hunts or incited mobs of people to think that a good lynching was a perfect way to bring the community together against a common enemy. Who needs a trial when we all know the truth about what happened and what should be done about it? Sorry, but I don’t want Twitter to have the power to override our system of trial by jury.)

Now, it’s true that Twitter and other social media (a quick search of Facebook delivered more than half dozen “Save Troy Davis” pages, groups and communities) has played a large role in making people aware of the Troy Davis case all over the world. But social media sentiment, no matter how passionate or how high it trends on Twitter, couldn’t have saved Davis any more than it could convict Casey Anthony–another high profile legal case where people seemed genuinely shocked they couldn’t get the outcome they wanted via tweets and status updates. (Not coincidentally, in the weeks leading up to Davis’ execution the #CaseyAnthony hashtag reemerged among the trending topics on Twitter, as her escape from conviction for the murder of her young daughter Caylee was often cited as an example of a racist double-standard in the justice system.)