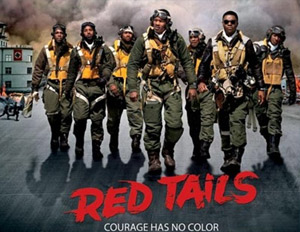 I urge everyone to see Red Tails, the film based on the story of the legendary Tuskegee Airmen that is being released this weekend. This movie offers all the opportunity to view a rare event on the silver screen: portrayals of intelligent, complex and dignified African Americans who have played a pivotal role in the one of the most celebrated chapters in modern military history.

Red Tails has already received great buzz in the Twitterverse, and has been shown in screenings ranging from Tuskegee University to The White House. In fact, I recently had the honor of attending a screening in Birmingham, Michigan at the invitation of former Detroit Mayor Dennis Archer and his son, Ignition Media CEO Dennis Archer, Jr. The event brought out cast members, luminaries, BE 100s CEOs and a few of the original Tuskegee Airmen. In fact, meeting these courageous men was the highlight of that evening.

Archer said he decided to hold the screening after attending the Black Corporate Directors Conference, the annual power confab organized by John Rogers, chairman of Ariel Investments (No. 5 on the BE ASSET MANAGERS list with $5.5 billion in assets under management), held in Laguna Beach, California last fall. He shared details of a session that featured George Lucas, creator of the Star Wars franchise who recounted how several studios turned down the project despite his Hollywood powerhouse status. In order to produce the film, Lucas provided the financing. (In fact, the aerial exploits of the Tuskegee Airman served as inspiration for Lucas in the development of Star Wars and those who know the history affectionately refer to Red tails as “the seventh chapter” of the series.)

Archer and others vowed that they would vigorously promote the film, sharing the history of the Tuskegee Airmen to as many audiences as possible and getting pledges from screening audience members to bring family members, friends and youth to see the movie during opening weekend since the initial tally of box office receipts is so critical in determining a film’s success, as well as gaining Hollywood’s interest in developing and distributing similar fare.

Another attendee, Joseph B. Anderson, Jr., CEO of Troy, Michigan-based TAG Holdings L.L.C (No. 5 on the BE INDUSTRIAL/SERVICE COMPANIES list with $675 million in revenues) told the screening audience that he had been inspired by the example of the Tuskegee Airmen. A West Point graduate whose military experiences in Vietnam were chronicled in the Academy Award-winning 1967 documentary, The Anderson Platoon, said although Blacks played significant roles in U.S. military history for centuries, they had been largely denied leadership positions and skills training. They were barred from being aviators until civil rights organizations and Black press exerted pressure that eventually led to the formation of the all African American pursuit squadron based in Tuskegee, Alabama in 1941–more than a decade before the Civil Rights Movement. The squadron would go on toÂ  participate in more than 1,500 missions, representing what noted scholar and civil rights activist W.E. B. DuBois called “The Talented Tenth,â€ the group that would advance our race through intellect and leadership. Despite being among the nation’s most educated and accomplished officers and having distinquished combat records, they had to contend with racism at home and abroad. It took forceful leaders like Benjamin O. Davis, Jr., commander of the Tuskegee Airmen who would become the first African American general in the U.S. Air Force, who took his battle to the Pentagon in defense of his men and to stop some within the military’s top brass from dismantling the program.

Since that time, Anderson further stated, the armed forces has served as a means for African Americans to demonstrate their prowess as they rise to the highest ranks and use that experience as a platform to excel in business and government, citing former Secretary of State Colin Powell as an exemplar of that tradition. In 2007, 300 living and deceased Tuskegee Airmen were honored withÂ  the Congressional Gold Medal for their enduring heroism.

Anderson further mentioned that former Tuskegee Airmen had served the nation and the world, making significant strides in academia, politics and business. In fact, I had the privilege of interviewing one of the most prominent squadron members, the late Lee Archer, Jr., who held the distinction of earning Flying Ace status after he shot down five German Me-109 planes during World War II after serving in more than 169 campaigns. On the ground, Archer soared as a business titan and champion for Black business. He worked closely with the late legendary deal maker Reginald F. Lewis in financing small and minority companies as head of a slew of MESBICS (minority enterprise small business investment corporations). He served as a key member of the investment group that helped Lewis make historic acquisitions. The first was McCall Pattern Co., in which Lewis investing $1 million of his own capital and $24 million in borrowed funds, and then sold the firm to a British textile firm for $90 million, a 90-to-1 return on the initial investment. Next came the deal that would vault Black business to new heights: Lewis’ unprecedented $985 million leveraged buyout of Beatrice International Foods Companies, a collection of 64 processed food manufacturers in 31 countries, including Europe, Australia, and Asia. In 1987, it became the largest buyout ever of overseas assets of an American company and created the first billion-dollar Black-owned business to lead the BE 100s. For his trailblazing efforts,Â  Archer was inducted as a Millennium Member of the Reginald F. Lewis Museum in 2009.

Archer is just one example of the caliber of the individual produced by the Tuskegee Airman: fierce warriors of the sky who became fearless groundbreakers dedicated to uplifting our race and the nation. That’s why Red Tails is so important. It’s a tribute to past achievement and a reminder of continued vigilance for limitless opportunities.

So as I looked at the film, I beamed with pride, enjoying the aerial derring-do of these African American fighter pilots in their red-tailed P-51Mustangs. For decades, such African American heroism has been absent from war films.

This film offers other lessons as well. Our contributions are a part of American and world history and must be shared with current and future generations–regardless of race.Â  We must reveal these milestones through the most powerful mediums possible, especially through digital technology. We must find creative ways to fund such efforts, including self-financing and aggressive promotion in the same manner some groups have pushed Red Tails.

Let’s use the top-flight performance of the Tuskegee Airmen and those of other such trailblazers to inspire us to demonstrate that we will continue to be impact players in all aspects of global society regardless of the odds, and kindle that spirit of excellence, sacrifice and resilience. That is is our obligation.

Let us soar on their wings.