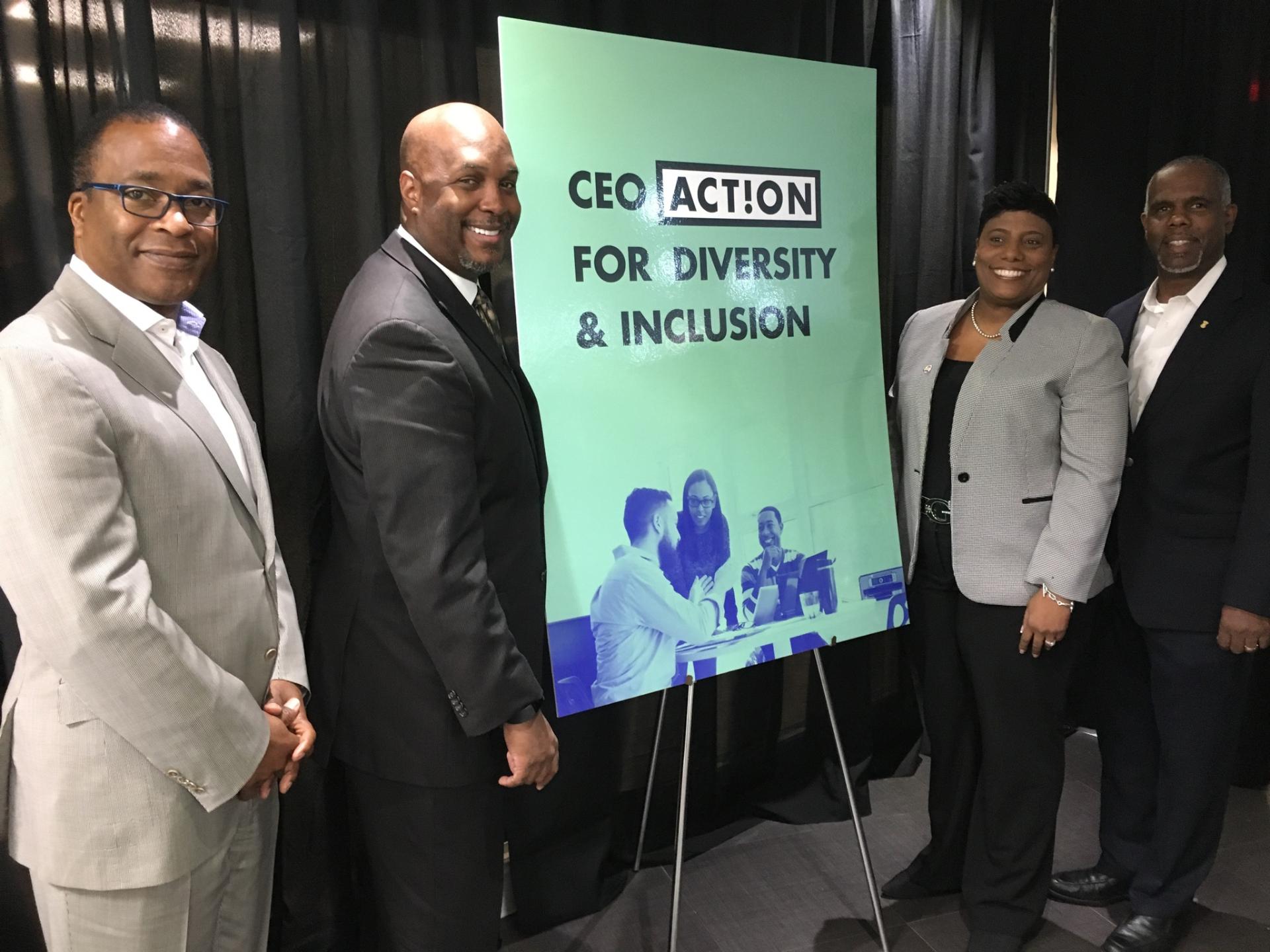 I recently gained the opportunity to connect with attendees of the inaugural closed-door summit of CEO Action for Diversity and Inclusion, an initiative cited as the largest commitment by chief executives to move corporate D&I forward. In fact, I talked with four members—Veronica L. Nelson, executive director of Advancing Minorities Interest In Engineering (AMIE); Cid Wilson, president and CEO of Hispanic Association of Corporate Responsibility (HACR); Michael Bush, CEO of business network Great Place To Work; and Joe M. Ricks, president of the HBCU Business Deans Roundtable—to gain greater insight into the program and its potential impact on inclusion and race relations in corporate America.

Among the 330 signatories of the CEO Action pledge to cultivate corporate environments that embrace employee discussions on D&I and race, they joined roughly 70 corporate and academic leaders who met to engage in their own candid, daylong conversations under such themes as “Getting Comfortable with the Uncomfortable,” “Being Truthful About Barriers” and “Creating Collaborative Difference.”

Initiated in response to the 2016 police shooting deaths of African American men and ensuing protests, CEO action represents 85 industries and 20 universities and associations led by a steering committee that includes the heads of PwC, Accenture, New York Life, and black global business leadership organization Executive Leadership Council. At the early November session in New York City, the coalition announced the formation of its President’s Circle to connect students, faculty, and administrators to D&I issues on college campuses.

Comparing the convening to the founding of civil rights groups NAACP, National Urban League, and LULAC (League of United Latin American Citizens) in the early 20th century, HACR’s Wilson, an Afro-Latino,  described the session as being “a very historic gathering. What was common with all of these meetings was that it was the first of a movement to illuminate what we know is an issue.”

The following are edited excerpts from my post-event roundtable discussion:

Attending this inaugural CEO Action summit, did you gain a better understanding of its mandate?

VERONICA NELSON: I wasn’t sure what to expect. I had the opportunity to work on the Race Working Team as one of the multiple working teams set up prior to the summit. Initially, we were skimming the surface and then we had those deep discussions. If we’re truly going to make a difference when it comes to race then we need to have those difficult conversations. We need to figure out where we are in that whole diversity and inclusion journey in order to make a difference. We need to have those conversations with the CEOs and it needs to funnel through the organization.

I think the CEOs realize that they’re at different points, and they realize that this is critical, something they need to do and can’t just skim the surface when trying to come up with diversity and inclusion strategies. They have to be embedded in the culture and their strategies.

So where do we now stand in terms of corporate diversity?

JOE RICKS: The problem is we don’t know. We are still in a defining prospect of what diversity actually means. I mean, it just came out in this discussion here. To some, there’s race and if it’s outside of race, [then] race gets pushed aside or watered down. Well, if you were at LGBT and if race is not your issue, if it’s about race then it’s watered down with LGBT.

To really understand what we mean when we say diversity, we’re going to have to be brave enough to define what that is and define it within measurable terms so we can understand whether or not we’re making progress. Diversity is looked at right now at a 50,000-foot level.

Does this initiative have a real opportunity to do what Joe talked about, define diversity?

NELSON: I think it does, and it was very important no matter where we are in that diversity and inclusion journey and how we define it, to have everyone in that room. Some CEOs haven’t jumped in yet because they feel that it’s just words. They want to see that there are true actions that come from this and that we truly share best practices. They’re making one another accountable and realize that there are some flaws in their strategies right now but they’re the ones that can call one another on the carpet. So I think it’s important to have all of them in the room and to listen, and for those to get up and tell their story and just expose themselves which is extremely important.

As long as we have someone who’s not racially diverse, or not ethnically diverse, but they have the thought there, that’s good enough for us. And for me, the answer is no, it’s not because there’s a big difference between having someone who may bring the thought into the group versus someone who brings their life experiences into the group. I plan to promote within the CEO Action for Diversity and Inclusion that when we talk about racial and ethnic diversity, we’re talking about racial and ethnic diversity. We’re not pivoting to other ways that dilute it.

What actions are being developed to further communicate what diversity means and how it can best be put into action?

MICHAEL BUSH: Personally, I’m not inspired to define and talk about it. It’s more about action, and the actions that are required are the underrepresented groups of people needed to be at the top of organizations. That’s how wealth was created. That’s how policy is created. That’s how governments are influenced. So it’s numbers, and it’s at the top. So the actions are to get under-reps in the groups on boards of directors, in the CEO position, and reporting to the CEO.

How do you change that equation?

BUSH: We’re not there on any of these groups so that is the metric that matters to me. These are the actions that CEOs can take. CEOs can decide, “I am going to promote that woman into a position that she is not ready for yet.” They do it every day for white employees. There’s nothing new here but for some, it becomes a risk. They need to do it. They need to let the organization know they’re going to do it. It’s sponsorship, and then you tell everybody who reports to the CEO, “You are going to go and promote somebody from one of these underrepresented groups because going beyond that, to expand the definition of diversity, is a distraction tactic that I think we’ve all been involved in, myself for 30 years. So I think the actions are around promotion into positions of power influence.

The challenge continues to be the pipeline. We should be seeing the emergence of the next wave as top African American executives are retiring. We’re not seeing that trend.

NELSON: That’s the frustrating part, that you don’t see it and you don’t see the preparation to get the next generation ready for those positions. So when they retire, the numbers start to shrink again.

BUSH: When the pipeline was there, people didn’t get promoted.

WILSON: When you’re looking at attrition of minorities in corporate America, you will see that there is a correlation between attrition and lack of sponsorship. What percentage of people of color are being sponsored? If the number is small, you will see that there’s a correlation between the small number of sponsorships and high level of attrition. You’re going to need to address that because we could continue to expand that pipeline but if you don’t expand the sponsorship, the attrition is going to continue. So you need that sponsorship at the executive level, the C-suite level, the board level. Then you have to see how you integrate it, not only from the corporate side but into other areas.

What are your expectations for the next stages of your involvement with CEO Action?

BUSH: I that it’s important to get above 330 signatories to 1.000. Otherwise, the 330 starts to weaken then other people aren’t going to come aboard. I also think it’s really important to let other CEOs know that everybody survived today. No one was attacked. Everyone was taken care of and great effort was made to do that. I think that’s important so that the numbers can increase. This is a situation where if you sponsor someone like a connected woman then she is going to help you find other high-potential women. That’s how the seed blossoms, that’s the power of this one small act.

It’s not just that there was one meeting today. There are subgroups that are working. There’s a group on race, a group on metrics. There are subcommittees that many people have put people in their companies on, working to make sure that the momentum is increased. Action is the important word. I don’t have to do in my company what someone else does in their company. I just need to do something.