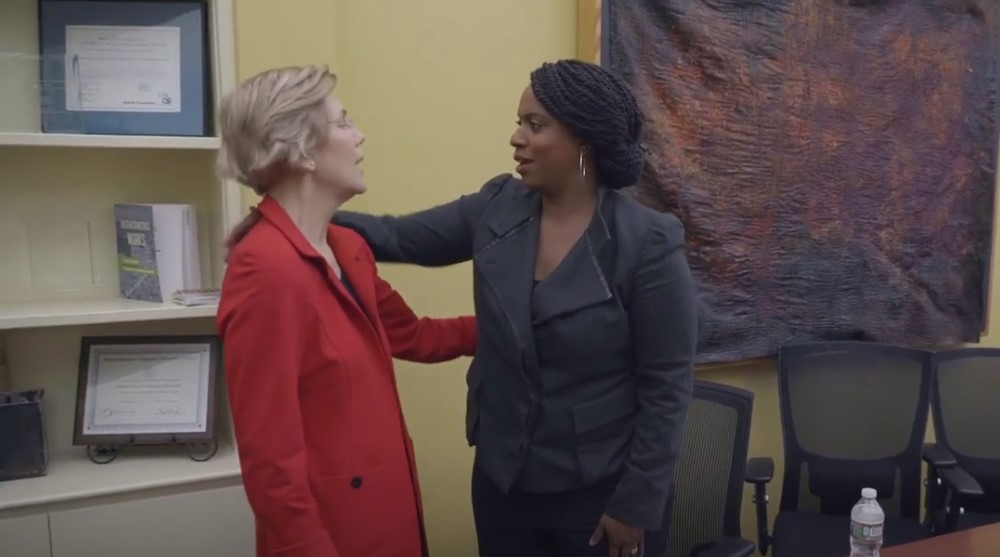 As the Democratic presidential candidates prepare for the next round of debates and primary season contests, all realize that black voters are critical to their respective political fortunes.

Massachusetts Sen. Elizabeth Warren, the putative frontrunner for the Democratic nomination, has not been able to make significant inroads with one of the party’s most loyal constituencies. For example, a recent Quinnipiac University survey revealed that Warren stood at 19% support among African Americans versus an astounding 40% for Vice President Joseph Biden although he has lost ground with the general Democratic electorate due to a series of campaign gaffes.

Warren, however, gained an endorser on Wednesday that’s expected to bolster her outreach efforts to black voters: Ayanna S. Pressley, the high-profile congresswoman from her home state. In making her YouTube video announcement Wednesday, Pressley asserted: “For Elizabeth and for me, power belongs in the hands of the people. That’s why she’s fighting for fundamental change that restores power to those who have been left behind and centers those who’ve never had access to it in the first place.”

“We find ourselves in a fight for the soul of our nation, and I know Elizabeth can win it,” she further stated of her long-term ally.

Breaking From ‘The Squad”

What made Pressley’s endorsement so buzzworthy was her decision to break with “The Squad”—the multicultural quartet of progressive, outspoken freshman congresswomen who have often rankled establishment politicians on both sides of the aisle. Representatives Alexandria Ocasio-Cortez of New York, Rashida Tlaib of Michigan, and Ilhan Omar of Minnesota have all backed liberal Vermont Sen. Bernie Sanders who is making his second consecutive run for the White House.

Listed among BLACK ENTERPRISE’s roster of those representing “The New Power in Politics,” the former Boston City Council member was noted for “beating the establishment” to become the first African American congresswoman from the state of Massachusetts. The persistent Pressley set her path to victory by building grassroots support to defeat the local and national political machinery. During the Democratic primary, she defeated 10-term incumbent Michael Capuano, who gained backing from some of America’s most celebrated black politicians, a group that included civil rights legend Rep. John Lewis (D-GA) and Massachusetts first African American governor, Deval Patrick.

A Magnet to Attract Black Voters for the Primaries

Pressley’s presence is expected to draw large numbers of black voters to the Warren campaign and serve to subtract such supporters from Joe Biden, who, up to this point, has had a seemingly unshakeable allegiance due largely to his eight-year vice-presidential service to President Barack Obama.

In general, the other candidates also fall far behind Biden in resonance with African Americans. The Sanders’ campaign has proven successful to a degree in receiving the embrace of younger African Americans. The two black candidates, Sens. Kamala Harris and Cory Booker still grapple with making a stronger game-changing connection among black voters. And even though South Bend, Indiana, Mayor Pete Buttigieg has unveiled his so-called Douglass Plan—his program named after black abolitionist Frederick Douglass that’s designed to address racial inequities in health, education, and criminal justice, among others—black voters still question his handling of racial issues involving local police in his mayoral role.

For candidates still in the race on Feb. 29, the black vote will be the key to victory in South Carolina, an early Southern primary state where about 60% of the Democratic electorate is black. Political observers note that Biden has the edge among older black Democrats since they tend to go the polls in greater numbers than younger ones. For example, the National Review reported that a recent CNN poll revealed that black South Carolinians favored Biden over Warren 45% to 4%. But Warren is banking on Pressley to be impactful to rally the members of the Democratic base as well as bring in new voters on the stump and through her huge social media following that includes more than 497,000 she reaches on Twitter alone.