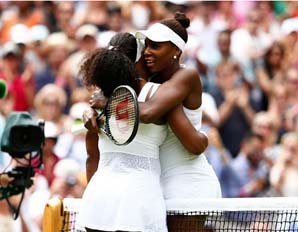 Serena Williams beat big sister Venus and came out aÂ 6-2, 1-6, 6-3 winner in a victory that delivers the younger Williams into the semifinals of the U.S. Open. While there could only be one winner, in the hearts and minds of their legions of fans, they’re both winners.

“It definitely doesn’t get easier,â€ she said about facing her sibling. “But today I was out there, and I thought: ‘Wow. I’m 33, and she just turned 35. I don’t know how many more moments like this we’ll have.'”

“I’m playing the best player in the tournament,” she added. “She knows how to play, how to win. She knows all my weaknesses.â€ #RenasArmy

As an oldest sibling I find myself routing 4 Venus. I know Serena’s on the verge of history but stop letting your lil sis tap that yah-mean!

Big CONGRATS to queen Serena Williams for her advancement to the US Open 2015 semi-finals!#Venus #2MoreToGo #History pic.twitter.com/GEwQZJejOm

Both Serena and Venus served balls going 121 MPH during this match. That’s remarkable.

Though the sisters haveÂ met 26 timesÂ (13Â in Grand Slam events and 8 in Grand Slam finals), they’ve consistently been questioned about upholding their sisterhood bond while being rivals. The sisters played their first professional match against each other in the second round of the 1998 Australian Open and Venus was the victor. They played again in the quarterfinals of the Italian Open, the first clay court tournament of Serena’s career and, once again, Venus won. Soon after, they teamed up to win two doubles titles.

Venus was the first to turn professional, the first to create a more diverse, mainstream interest in professional tennis, and the first to win Wimbledon and reach No. 1. However,Â Serena has passed her in relation to career wins, on and off the court; earning 20 Grand Slam singles titles (her sister won seven), raking in multiple weeks at No. 1 and head-to-head edges over her rivals.

“…Venus and I have definitely proved that you can be enemies on the court, and you can be friends and sisters off the court,” Serena has said of playing against her sister. Venus concurred after the match Tuesday night. “I feel like this is what we always wanted growing up, just to be out there on the big stage duking it out when someone named Williams will win. That’s a given on this one.â€