With Trademark Passion, Drake Makes His Mark as FIFA 14 Pitchman 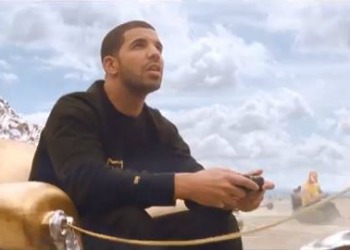 Perfect Match: With release of FIFA 14, Drake solidifies himself as one of the top pitchmen in hip hop.

The scene was almost surreal: Drake and a few members of his entourage walked onto the floor at the Jordan Brand Classic at the Barclays center last April. The audience erupted into pure mayhem. He flashed a big smile and, for all of his bravado, was a slight bit embarrassed since a few of the the players on the floor were distracted. He was just trying to have a seat.

Later, amid the adulation for his very presence, Drake struck a reverential tone that day in Brooklyn.

“Shout out to Michael Jordan, a legendary mentor to me,â€ Drake said in the middle of his stage performance. “Shout out to everyone in the Jordan family.â€

At Electronic Entertainment Expo this past June, Drake introduced FIFA 14 in Los Angeles.

“My passion for soccer runs deep, and my respect for the team behind FIFA is just as deep,â€ he said in a brief appearance, imparting his signature affect. “When I play the game I can only think about what the development team behind the game are doing to make the FIFA I love even better. That’s why I’ve been connected to FIFA in the past. That’s why we’re connected here today, and of course in the future.â€

He is as known for his songs about regret and longing, as he is for his music about emotion and excess. He is a global superstar in the Internet age, at 26, perhaps the most well-known rapper; Complex Music recently named him the No. 1 rapper, according to Google Trends. And for sports brands, he has become the perfect salesman: passionate, handsome, trendy and really, really popular.

Even better for EA Sports? He’s an avid player of FIFA 14, one of its most popular titles.

That’s why it should take few by surprise that his business relationship with EA Sports has evolved to the point where both his album, Nothing Was the Same and FIFA 14 were released on the same day. FIFA 14 celebrated with a launch party in New York City Monday. An EA Sports spokesperson said the release date of both projects was purely coincidental — Nothing Was the Same was originally slated for release on Sept. 17.

“We wanted a line-up of global stars to help drive home our campaign message that everyone is playing FIFA 14,â€ said Jamie McKinlay, VP, Global Marketing EA Sports. “Drake is one of the biggest names in music right now and also loves to play FIFA, which made him a natural fit for the TV spot and an intrinsic part of our wider FIFA 14 marketing campaign.â€

FIFA 14’s promotional spot features Drake riding on a caravan holding a controller as if he was playing the game. It was filmed on a lot where maintenance on jets like the Airbus A380 is done, but the finished product looks as if it was shot in a desert land. The commercial, done by Wieden+Kennedy Amsterdam features Lionel Messi.

“Millions of people play FIFA,â€ said Dave Smith, copywriter for W+K Amsterdam, who has done spots for Heineken, Powerade, GE and Nike. “From everyday people to famous people, the game is huge. It is quite literally a global movement. And the range of athletes and stars mixed with ordinary people in the ad showcases this. What’s more, all the athletes and stars in the ad are actually FIFA fans. Drake is a pretty good player at that.â€

The game’s cover features Messi, largely regarded as the best player in the world.

“My life takes me to places all around the world, like Barcelona,â€ he said at E3, perhaps in reference to the star, who plays for the club. “I know people from all walks of life and no matter where I go there are two constants, everyone wants to talk soccer, and everyone is playing FIFA.â€

For EA Sports, Drake’s endorsement goes a long way. The Marketing Arm’s Celebrity DBI Index, which ranks celebrities’ ability to impact consumers, provided its latest numbers on Drake. According to Chris Anderson, the agency’s communications director, Drake is known by about 48 percent of U.S. consumers nationally, making him about as well known as Mark Cuban, Joe Flacco, Tyson Beckford and Ken Jeong.

In the trendsetter category, his best attribute according to the index, he ranks No. 148 alongside celebrities like LeBron James, Tyler Perry, Jessica Alba and Angelina Jolie. At No. 237 in the DBI database, consumers consider him to be about as influential as Muhammad Ali, Coach K, Clint Eastwood and Derrick Rose.

In a promotional video for the making of the commercial for the game, Drake casually says he had a rivalry with the rapper J. Cole. It wasn’t forced or contrived. It was as natural and candid as the meaningful melodies and raps that has endeared him to a generation of fans.