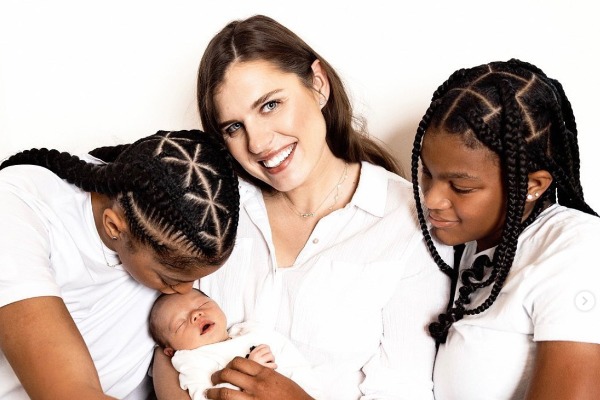 On Friday, Parker took to Instagram to introduce baby Airr Larry Petrakov Parker to the world. Born on Feb. 11 and named, in part, in honor of her father Larry, Parker kissed her newborn son in the photo while her wife and daughter held him.

“We are in absolute love and utter appreciation that Goose chose us,” Parker captioned the post. “Welcome to the fam SON.”

In December, Parker announced her wife was pregnant. The announcement came two months after Parker won a WNBA title with the Chicago Sky, ESPN reports.

“Thank you for always loving Lailaa as your own, being my calm, my support, my voice of reason, my laughs, my cuddles, my dance in the rain, my happy, my home,” Parker revealed at the time.

“Thanks for constantly challenging me and telling me when I’m wrong 🙄. I LOVE YOU🐞 I appreciate you, I value you and what we have.”

Parker and Petrakova tied the knot in 2019. The two have extensive backgrounds in professional basketball, with Parker becoming the first WNBA player to grace the cover of the popular NB2K video game. Her résumé includes 2007 and 2008 NCAA titles with Tennessee before becoming the WNBA’s top draft pick, Rookie of the Year, and MVP in 2008 with the Los Angeles Sparks.

Petrakova played professional basketball for the Russian national team in the 2012 Summer Olympics and competed for UMMC Ekaterinburg when Parker was on that Russian team.

Parker is already a mother to her daughter Lailaa whom she welcomed with her ex-husband Shelden Williams in May 2009. She has praised Petrakova in the past for how she has loved Lailaa throughout their romantic relationship, SI reports.