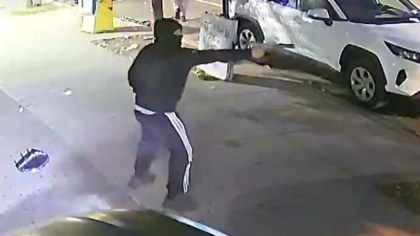 A fiancée will not have her wedding day after her husband-to-be was killed following a fatal robbery.

As crime continues to spike in New York City, 34-year-old Milton Grant lost his life in one of the eight shootings that plagued the city on Monday, CNN reported. Grant was shot in the head while trying to get away from a car full of robbers in Manhattan’s Inwood community.

Surveillance video shows Grant seated inside of his car with another 33-year-old unidentified victim when three gunmen approached them and demanded their property. After being shot, Grant’s car crashed on the side of the street and the robbers came to remove his watch, ring, and a chain from his neck.

The other person riding in the car with Grant was shot in the groin while trying to flee the scene. The robbers took the other victim’s chain, CBS2 in New York reported.

“My husband liked nice things, Grant’s fiancée, Nixia Jordan, said. “He worked hard for his jewelry, his shoes, his clothes, his cars. and for someone to just murder him for his belongings, instead of working hard for getting his own, it’s just, it’s a slap in the face, to take a life–just for his jewelry, just for his things.”

The three suspects ran into a gray, four-door Honda Accord that was driven by a fourth individual and fled the scene,” police said. Authorities are asking for the public’s help in identifying the suspects.

“I never thought that my husband would be taken from me in this way,” Jordan said.

“We talked about having forever together about raising our kids, we just put them in sports, so now I’m thinking how am I supposed to take them to practice without their dad accompanying me, how am I going to do family vacations without him,” she added.

Grant’s murder comes amid a nationwide surge of violence and crime. On Wednesday, President Biden announced a plan to slow down all the violent crime plaguing cities across the country, the Associated Press reported.